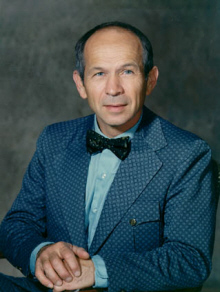 The man who designed the original spacecraft for Project Mercury and is credited with contributing to the designs of every U.S. human spacecraft from Mercury to the Space Shuttle has died.

Dr. Maxime A. Faget, who in 1958 became part of the Space Task Group that would later evolve into the NASA Johnson Space Center, died Saturday at his home in Houston. He was 83 years old.

"Without Max Faget's innovative designs and thoughtful approach to problem solving, America's space program would have had trouble getting off the ground," said NASA Administrator Sean O'Keefe. "He also was an aeronautics pioneer. In fact, it was his work on supersonic flight research that eventually led to his interest in space flight. The thoughts and prayers of the entire agency are with his family."

Faget's career with NASA dates back to 1946, when he joined the staff of Langley Research Center, Hampton, Va., as a research scientist. He worked in the Pilotless Aircraft Research Division and later was named head of the Performance Aerodynamics Branch. He conceived and proposed the development of the one-man spacecraft used in Project Mercury. 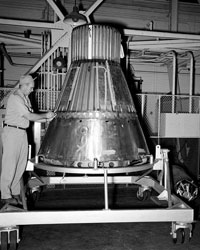 Faget was selected as one of the original 35 engineers as a nucleus of the Space Task Group to carry out the Mercury project. The group also devoted a lot of time to follow-on programs and Faget led the initial design and analysis teams that studied the feasibility of a flight to the Moon. As a result of his work and other NASA research, President John F. Kennedy was able to commit the U.S. to a lunar landing by the end of the 1960s.

"Max was a genuine icon," said NASA's Associate Administrator for Space Operations William Readdy, "a down-to-earth Cajun with a very nuts-and-bolts approach to engineering. He contributed immeasurably to America's successes in human space flight. His genius allowed us to compete and win the space race to the Moon."

"Max Faget was truly a legend of the manned space flight program," said Christopher C. Kraft, former Johnson Space Center director. "He was a true icon of the space program. There is no one in space flight history in this or any other country who has had a larger impact on man's quest in space exploration. He was a colleague and a friend I regarded with the highest esteem. History will remember him as one of the really great scientists of the 20th Century."

Faget was part of the original feasibility study for the Space Shuttle. His team then focused on Shuttle development. He retired from NASA in 1981 following the second shuttle mission (STS-2). His government service career spanned four decades.

After retiring from NASA, Faget was among the founders of one of the early private space companies, Space Industries Inc., established in 1982. One of its projects was the Wake Shield Facility, built for the University of Houston and flown twice aboard the Space Shuttle to demonstrate a technique for processing material in a near-perfect vacuum.

Born on August 26, 1921, in Stann Creek, British Honduras, Faget graduated from Louisiana State University with a Bachelor of Science degree in mechanical engineering in 1943. He joined the U.S. Navy where he saw considerable combat as an officer in the submarine service. 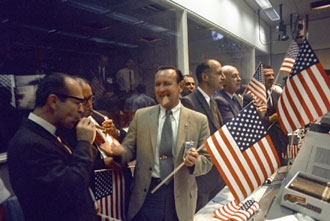 He received numerous honors and awards, including the Arthur S. Flemming Award, the NASA Medal for Outstanding Leadership, and honorary doctorate of engineering degrees from the University of Pittsburgh and Louisiana State University. He was inducted into the National Space Hall of Fame in 1969 and the National Inventors Hall of Fame in 2003. Faget was the first recipient of the Rotary National Award for Space Achievement in 1987.

Faget was preceded in death by his wife Nancy in 1994. He is survived by four children: Ann, Carol, Guy, and Nanette; a daughter in law, two sons in law and 10 grandchildren. Funeral arrangements are pending.