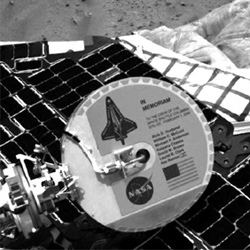 The fallen crew of Space Shuttle Columbia now has an enduring memorial on another planet. When NASA's Mars Exploration Rover (MER) Spirit landed on Mars Jan. 3, 2004, it brought with it a small commemorative plaque bearing the names of the seven astronauts. Spirit's landing area on Mars will now be known as the Columbia Memorial Station.

Spirit captured this image of the Columbia memorial plaque, mounted to the back of the rover's high-gain antenna. Click Image For Full Size Version.

"During this time of great joy for NASA, the Mars Exploration Rover team and the entire NASA family paused to remember our lost colleagues from the Columbia mission," NASA Administrator Sean O'Keefe said. "To venture into space, into the unknown, is a calling heard by the bravest, most dedicated individuals."

Since its flawless landing in Gusev Crater, Spirit has sent back several stunningly clear photos of its new home. Among them is a close-up image of the 6-inch plaque, mounted to the back of the rover's high-gain antenna. Designed by MER engineers at NASA's Jet Propulsion Laboratory, the plaque was installed March 28, 2003, during pre-launch processing at Kennedy Space Center's Payload Hazardous Servicing Facility. 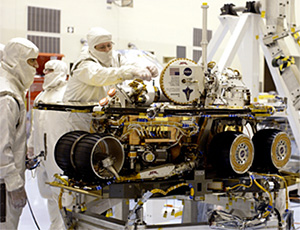 The plaque is visible as technicians at Kennedy Space Center prepare Spirit for launch.

The plaque reads:
In memoriam
To the crew of Space Shuttle Columbia
STS-107, February 1, 2003

The STS-107 patch, NASA emblem and American flag are all included on the plaque. A small Israeli flag appears beside the name of Ilan Ramon, Israel's first astronaut.

Spirit endured six harrowing minutes as it raced through the martian atmosphere toward the red planet's surface. Minutes later, the MER team received signals that the craft had landed successfully, prompting jubilant cheers. Within hours, Spirit returned its first photos.

"As team members gazed at Mars through Spirit's eyes, the Columbia memorial appeared in images returned to Earth, a fitting tribute to their own spirit and dedication," O'Keefe said. "Spirit carries the dream of exploration the brave astronauts of Columbia held in their hearts."