Padalka and Fincke had undocked their Soyuz capsule from the orbiting laboratory at 5:08 p.m. EDT and headed home. With them was Russian Space Forces Test Cosmonaut Yuri Shargin, who had come to the Station with the Expedition 10 crew, Commander Leroy Chiao and Cosmonaut Salizhan Sharipov. Shargin spent eight days on the Station doing scientific experiments. 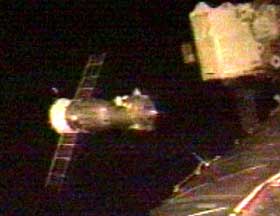 With Padalka and Fincke's launch in April, six months earlier than initial plans, the two-man crew lived and worked on the Station, conducting scientific experiments and maintaining Station systems.

Fincke led the American scientific research agenda, working in the Destiny Laboratory module of the Space Station for advances to further future exploration.

In addition to continued studies on the effects of weightlessness on the human body, Fincke conducted multiple experiments in the physical sciences, completing more than 100 percent of the research agenda with 24 research experiments.

Soon after the crew's arrival, one of the Station's control moment gyroscopes, which control the vehicle's orientation, lost power and shut down, requiring an unplanned spacewalk to replace a circuit breaker for the part. Donning Russian spacesuits, due to a cooling malfunction of the American spacesuits, Padalka and Fincke headed out into the void for their first time, but had to end the spacewalk within minutes when Fincke's oxygen system was not operating correctly. On their second attempt, the pair navigated around the American side of the Station and successfully replaced the circuit breaker, restoring power to the gyroscope. 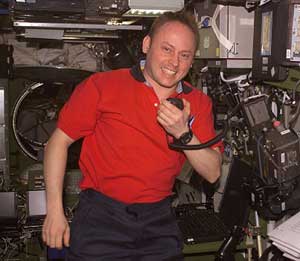 On two subsequent planned spacewalks, Padalka and Fincke replaced a set of samples being tested for their ability to withstand the space environment; they changed out a thruster residue experiment that had gathered data for more than two years; and installed radio antennas and upgraded navigational aids needed for next year's arrival of the European Automated Transfer Vehicle (ATV).

Aside from their planned mission activities, the ninth crew to live on Station experienced a series of events that kept them connected to Earth during their six-month orbital stay.

During an unrelenting hurricane season, Padalka and Fincke captured the fury of an alphabet of tropical weather systems in the Atlantic and Caribbean: Alex, Bonnie, Charley, Frances and Ivan with digital cameras onboard.

From space, they observed both life and death. The crew celebrated the birth of Fincke's baby daughter, Tarali Paulina, a first-time event for a Station resident and noted the death of former American President Ronald Reagan who first directed the construction of an orbital outpost.

Padalka and Fincke also did their part in inspiring the next generation of explorers in several Earth-bound activities, including a question-and-answer session to students on eating, a life necessity, in space. 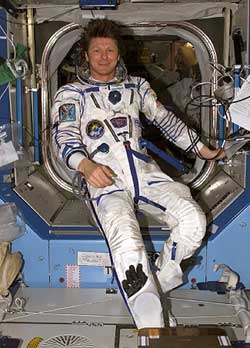 Returned to Earth, Padalka and Fincke will take part in debriefings and medical activities in Star City, Russia. They will then travel to Houston in mid-November for further post-flight activities.

Their mission includes two spacewalks, arrival of two unpiloted Progress supply capsules, and preparation for the arrival of the first Space Shuttle to visit the International Space Station since the Space Shuttle Columbia accident.

Science will continue, much of it with facilities and samples already on the Space Station. The Expedition 10 research agenda remains flexible. It includes experiments in human life sciences and space operations.

Chiao and Sharipov also will work with the Station's robotic arm, Canadarm2. Their activities will focus on observations outside of the Station, maintaining operator proficiency, and completing the checkout of the Canadarm2 system.
› Back To Top