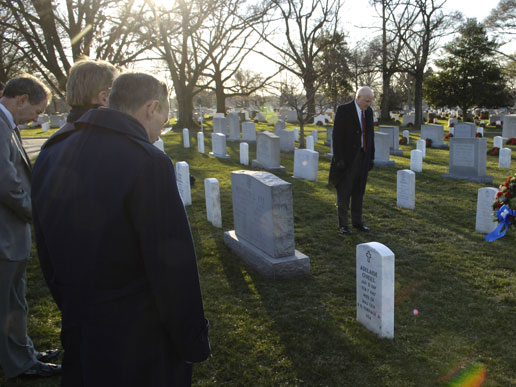 Image above: Former Astronaut and Senator John Glenn (right), NASA Administrator Michael Griffin and other NASA senior management participate in a wreath laying ceremony as part of NASA’s Day of Remembrance, Monday, Jan. 29, 2007, at Arlington National Cemetery. The wreathes were laid in the memory of those men and women who lost their lives in the quest of space exploration. Click image to enlarge. Image credit: NASA/Bill Ingalls.

Today, we honor the Apollo 1, Challenger and Columbia astronauts, as well as others at NASA who have given their lives in pursuit of the dream of flight. In recognition of NASA's Day of Remembrance, I and some of our astronauts will visit Arlington National Cemetery to lay a wreath in memory of those members of the NASA family who have fallen in the line of duty.

From the dawn of the space age, we have known that spaceflight would bring with it unique new challenges, opportunities, rewards, and risks.

The Apollo fire, which occurred forty years ago on January 27, 1967, was a particular blow, because so few had anticipated that our first tragedy would occur during a ground test. The fire, and the loss of Challenger and Columbia, are stark reminders that we must use our utmost ingenuity to anticipate all of the risks before us, not just those that are obvious. To imagine the ways in which a complex new machine might fail is the most difficult of all engineering challenges, yet it is the one we at NASA have accepted as the price of learning the arts and sciences of flight in all its forms.

This Day of Remembrance also reminds us that despite our losses, the American people have never wavered in their support for space exploration. They know that it brings out the best in us, our creativity, our curiosity, our courage in the face of the unknown. Space exploration reminds us of what it is to be a human being, in ways that have been, and will be again, both supremely gratifying and deeply humbling. But through it all, through both failure and success, we continue our work to know, to experience, to understand, to become a spacefaring civilization.

As Alfred, Lord Tennyson, put it in Ulysses:

"... my purpose holds to sail beyond the sunset, and the baths of all the western stars, until I die. It may be that the gulfs will wash us down. It may be we shall touch the Happy Isles, and see the great Achilles, whom we knew. Though much is taken, much abides; and though we are not now that strength which in the old days moved earth and heaven; that which we are, we are; one equal-temper of heroic hearts, made weak by time and fate, but strong in will to strive, to seek, to find, and not to yield."

Today, we honor the sacrifice of those who did not yield.