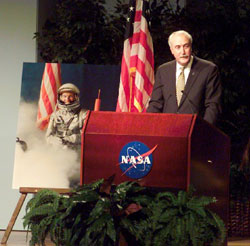 The NASA family gathered at the Johnson Space Center in Houston today to honor the memory of Mercury astronaut Gordon Cooper.

Cooper, who piloted the sixth and last flight of the Mercury program and later commanded Gemini 5, died Oct. 4 at his home in Ventura, Calif. He was 77 years old.

The surviving members of the "Original Seven" -- John Glenn, Scott Carpenter and Wally Schirra -- were there to honor their fallen brother, along with NASA Administrator Sean O'Keefe, legendary flight director Gene Kranz and other dignitaries.

O'Keefe called Cooper "a hero for millions of Americans" who "now is one with the stars." He was a "natural born stick and rudder man," said O'Keefe. "You could count on him in a tight spot."

Cooper's fellow astronaut John Glenn shared anecdotes about his comrade. "Gordo has scrambled," he said, invoking the language of test pilots. "I'm sure we'll all rendezvous out there somewhere." 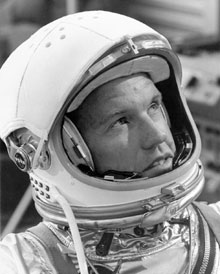 Image left: Cooper in the "white room," waiting for test activities to resume in preparation for his Mercury launch in May of 1963. Photo credit: NASA.Click for larger image

Read more memories from those who knew him in "Remembering 'Gordo'."

The youngest of the original seven astronauts, Cooper's flight in his Faith 7 capsule stretched the capabilities of the Mercury spacecraft to the limits. The mission, May 15 and 16, 1963, lasted more than 34 hours and 22 orbits. That was more than three times the longest U.S. human space flight until that time, and far exceeded the initial design capability of the capsule. During his flight, Cooper also became the first astronaut to sleep in space.

"Gordon Cooper was a pioneer of human space exploration," said President George W. Bush. "He was one of the original seven Mercury astronauts, logging more than 225 hours in space throughout his distinguished career. He also served his country in the United States Air Force and received numerous awards including the Distinguished Flying Cross. Laura joins me in sending our condolences to the entire Cooper family," Bush said.

Cooper and Charles "Pete" Conrad Jr. flew the troubled and suspenseful third flight of the Gemini program in August 1965. The goal of the mission was to prove astronauts could survive in space long enough to perform a lunar mission, which takes eight days.

During their eight-day mission, they experienced a number of problems with power systems, thruster fuel, venting gas that caused the spacecraft to roll, and more in a seemingly unending series. But they stayed in orbit for almost 191 hours, 122 orbits in nearly eight days, and got themselves and their spacecraft back intact. In orbit, they accomplished a "shadow rendezvous" with an imaginary spacecraft, an exercise demonstrating it could be done. 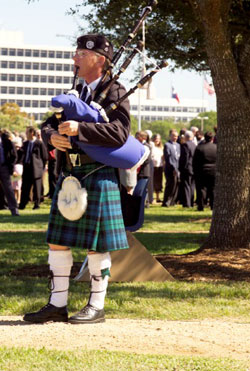 The Gemini 5 mission established a new space endurance record at the time, travelling 3,312,993 miles in 190 hours and 56 minutes. Cooper also became the first man to make a second orbital flight and thus won for the United States the lead in man-hours in space by accumulating a total of 225 hours and 15 minutes.

A Life of Service

Leroy Gordon Cooper Jr. was born on March 6, 1927, in Shawnee, Okla. He served in the Marine Corps in 1945 and 1946, then attended the University of Hawaii where he was commissioned a second lieutenant in the U.S. Army.

Cooper earned a bachelor's degree at the Air Force Institute of Technology in 1956, then completed test pilot school at Edwards Air Force Base, Calif. He served as a test pilot there until he was selected as a Mercury astronaut.

He founded Gordon Cooper and Associates that year and served as president of the consulting firm that specialized in activities ranging from aerospace to hotel and land development projects. Cooper was a director of a number of other organizations, most specializing in energy, advanced electronics systems, efficient homes, boats and marine systems and equipment. 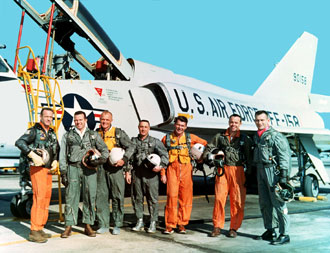 Throughout his life, Cooper pursued a wide range of activities, both professionally and as hobbies. A NASA biography lists his hobbies as treasure hunting, archaeology, racing, flying, skiing, boating, hunting and fishing. Among his numerous awards were the Air Force Legion of Merit, the Distinguished Flying Cross with cluster, NASA's Exceptional Service Medal, the NASA Distinguished Service Medal, the Collier Trophy and the Harmon Trophy.

He was the first active-duty military man to address joint sessions of Congress twice.

Cooper continued to design and test new aircraft in Southern California, never giving up his passion for pushing the envelope. Cooper told a reporter when he was 71, "I get cranky if I don't fly at least three times a month."