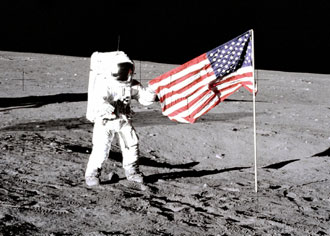 This week, NASA honors his memory and his contributions to America's space program with the presentation of the Ambassador of Exploration Award at 2 p.m. EST, Saturday, Nov. 18, at The Museum of Flight in Seattle.

Conrad will be remembered as an exceptional pilot and as someone who was "always pushing the boundaries, always coming into my office with a new idea and, at 69, he had the spirit of a 13- year-old," former NASA Administrator Dan Goldin told CNN in July 1999 upon learning of Conrad's death.

As commander of Apollo 12, the second successful lunar landing, Conrad stepped onto the lunar surface and shouted, "Whoopee! Man, that may have been a small one for Neil, but that's a long one for me!" He later stated that he did this to win a bet he made with a friend to prove that NASA did not script astronaut comments.

Conrad's widow Nancy will accept the award on his behalf. She will present it for display to The Museum of Flight President Bonnie Dunbar. Dunbar is also a former NASA astronaut. 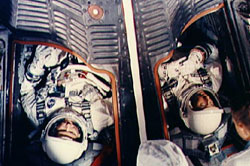 The award ceremony coincides with the 37th anniversary of the Apollo 12 mission of Nov. 14-19, 1969, and culminates a day of museum space-related activities and workshops.

Conrad began his career as a Navy test pilot after obtaining a bachelor of science degree in aeronautical engineering from Princeton University. He served two decades in the Navy, 11 of which were as an astronaut.

After leaving the Navy in 1973, Conrad been a successful career in business and served as a vice president and consultant for McDonell Douglas, among others.

NASA is presenting the Ambassador of Exploration Award to the astronauts and other key individuals who participated in the Mercury, Gemini and Apollo space programs that realized America's vision of space exploration from 1961 to 1972. 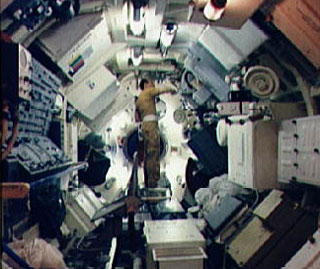 Image right: Astronaut Charles Conrad Jr., commander of the first manned Skylab mission, goes through a checklist of experiment activity during Skylab training at JSC. Conrad is standing in the Multiple Docking Adapter (MDA) in the Mission Simulation and Training Facility At JSC. Image credit: NASA.

The award is a sample of lunar material mounted for public display. The material is part of the 842 pounds of samples brought back to Earth during the six Apollo lunar expeditions from 1969 to 1972.

Conrad's award will be displayed at The Museum of Flight, one of the largest air and space museums in the world. Conrad was the third man to walk on the moon as commander of Apollo 12, the second lunar landing mission. He and lunar module pilot Alan L. Bean spent 31.5 hours on the moon. Conrad also served as pilot of the Gemini V mission; commander of Gemini XI; and commander of the first mission launched to the Skylab space station in 1973. He retired from the U.S. Navy and NASA as a captain in 1974.