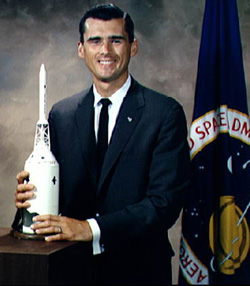 NASA will honor the late astronaut Naval Lt. Cmdr. Roger B. Chaffee with the presentation of an Ambassador of Exploration Award for his involvement in the U.S. space program.

Chaffee's wife Martha will accept the award Saturday, Oct. 6, and present it for display at Purdue University, Chaffee's alma mater, during the halftime show of the Purdue-Ohio State football game.

Chaffee and his crewmates Gus Grissom and Ed White lost their lives on Jan. 27, 1967, in a fire aboard the Apollo Command Module during a preflight test on the launch pad at NASA's Kennedy Space Center in Florida.

The astronauts were training for the first crewed Apollo flight. Chaffee posthumously was awarded the Congressional Space Medal of Honor and the United States Navy Air Medal.

Chaffee, a native of Grand Rapids, Mich., received a bachelor of science degree in aeronautical engineering from Purdue University in 1957 and entered the Navy later the same year.

As a Naval pilot he logged more than 2,300 hours flying time, including more than 2,000 hours in jet aircraft. 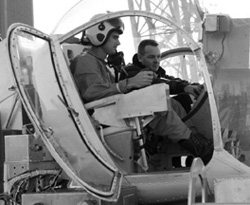 Chaffee was one of the third group of astronauts selected by NASA in October 1963.

In addition to participating in the overall astronaut training program, he was also tasked with working on flight control communications systems, instrumentation systems and attitude and translation control systems in the Apollo Branch of the Astronaut Office. On March 21, 1966, he was selected as one of the pilots for the AS-204 mission, the first 3-man Apollo flight.

NASA is giving the Ambassador of Exploration Award to the first generation of explorers in the Mercury, Gemini and Apollo space programs for realizing America’s vision of going to the moon. NASA also is recognizing several other key individuals who played significant roles in the early space programs. 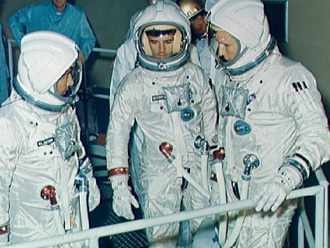 The award is a moon rock encased in Lucite and mounted for public display as inspiration to a new generation of explorers who will help us return humans to the moon and eventually on to Mars and beyond. The award is part of the 842 pounds of samples collected during the six Apollo lunar expeditions from 1969 to 1972.