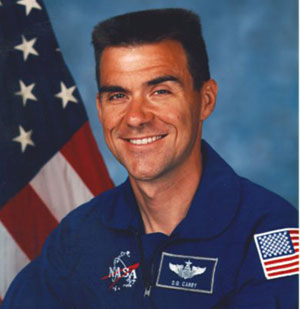 Talk about a change of scenery.

After fulfilling one dream to pilot a Space Shuttle and see the world from space, Astronaut Duane G. "Digger" Carey has left NASA to pursue another -- to see the planet up close from the open road.

Carey, a retired Air Force Lt. Colonel, plans to begin a motorcycle tour of the United States and eventually the world, camping along the way. He and his wife, Cheryl, are moving to Colorado Springs, Colorado, to prepare for the trip. They plan to launch their travels with a break-in expedition to Alaska.

Selected as an astronaut by NASA in 1996, Carey served as pilot of Space Shuttle mission STS-109 in 2002, a maintenance flight to the Hubble Space Telescope. STS-109 orbited the earth 165 times, traveling about 3.9 million miles ( + Read Full Bio).

"Duane is an exceptional Shuttle pilot, but years ago he was bitten by the motorcycle touring bug, and he always wanted to return to near-Earth exploration of our country aboard a motorcycle," said Ken Bowersox, Director of Flight Crew Operations. "We'll really miss his skill and expertise, but we all envy him in some way for heading off in a new direction."

"Cheryl and I will attempt to consummate a dream we first envisioned over 25 years ago," Carey said. "Our 22-plus years of public service in the United States Air Force and NASA have been incredibly rewarding, and we hope we've contributed something useful to our country over those years. Please join us in our hopes that America will continue her push for the stars, a quest that represents the single best hope for all of our futures."

As a young man, Carey discovered motorcycle touring and traveled the U.S., Mexico and Canada. He met his wife during that time, and they traveled together. Later, they settled down to raise a family. Carey began a career in the Air Force.

"I was lucky," Carey said. "In the Air Force, I learned to fly jets, and I did pretty well at it. I love flying. When I was able to join NASA and fly in space, I realized one of my greatest dreams."

But despite those pinnacles of success, the dream of traveling the road and discovering the world along the way has always remained.

"Many people would be amazed, but every day, every day, since those days on the road, I've had moments thinking about that experience. It's a passion for me," he said. "Even while looking down from space, I would imagine moving across those green expanses on a motorcycle. Now, I'll be traveling those roads and looking up to where I once was." 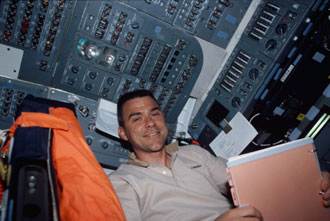 During his travels, Carey plans to talk to young people about the importance of math and science and the wonder of space travel.

Image right: Carey consults a reference manual on the flight deck of Columbia during the STS-109 mission in 2002. Photo credit: NASA.

"I owe a lot to my country," he explained. "I've been an Air Force jet pilot, and I've been an astronaut. And now, I want to tell people the importance of space flight, especially in the smaller, more rural communities I expect to visit."

Around campfires, there will be great surprise, and probably disbelief, when Carey relays to fellow campers his background as an astronaut, an astronaut far from the beaten path.

"To explore, we must always take some risks. We have to explore new territory. We don't know what we'll find out there, but we have to go out and find our future," he said.