Astronaut Dad on Duty
Life for Astronaut Mike Fincke has certainly changed since his launch for a six-month stay onboard the International Space Station. Now back on Earth, diaper changing and 2 a.m. bottle feedings test his tenacity. 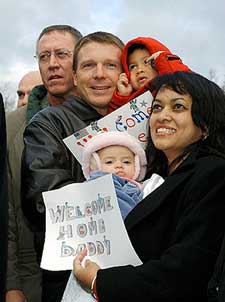 It's a test this astronaut 'Daddy' tackles head on, but not without cherishing each given moment.

Three months ago, Fincke reunited with his family -- wife Renita and 3-year-old son Chandra -- plus one: 4-month-old daughter, Tarali Paulina, who became the first child born while an astronaut parent was in orbit. She arrived June 18, 2004, just after Father's Day.

Soon after the October Soyuz landing, Fincke and Cosmonauts Gennady Padalka and Yuri Shargin were greeted with expected excitement from those who came to greet them. But the smile Fincke flashed upon seeing his family, including his new addition, unmatched all anticipation.

"My name is Daddy," Fincke said, introducing himself to his baby girl for the first time as he stepped off the transport jet in Star City, Russia.

"She definitely knows who I am now," he said.

"It didn’t take long for Tarali to know her Daddy," Renita Fincke said. "Her face just lights up every time she sees him."

Four months in a baby's life see several milestones like rolling over, smiling and making her first sounds.

"I remember when she rolled over for the first time," he said. "Renita e-mailed me while I was still on Station to tell me. It wasn’t national news, but to me it was."

Living in the confined vessels of the International Space Station for six months while flying at about 5 miles a second above the Earth, was a high point in an extraordinary life. Though Fincke says his family is "the best part of that life."

After bonding during a winter-week vacation at Walt Disney World in Florida, the Fincke family of four enjoyed a quiet, traditional Thanksgiving and Christmas holiday at home again.

"We figured we had enough exotic adventures that we would spend this holiday quietly at home," Fincke said. "Mike even made the turkey," Renita Fincke added.

While the couple says that balancing family and work here at NASA can be a challenge, the Finckes have a system: "Patience is required, and not much sleep is involved," Fincke quipped.

Renita Fincke, who also works at the Johnson Space Center as an engineer for Wyle Laboratories, says the NASA family came through with its support before, during and after the birth of the couple's second child.

"Everyone was wonderful, making sure I was comfortable," she said. "People here at NASA worked with the hospital to make sure that Mike and I would share this experience together." 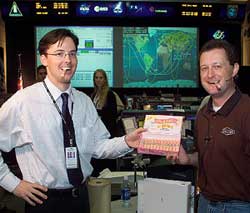 Communication technology kept both connected during the birth of their daughter. Fincke was able to hear the shrill of his baby's first cry while floating some 230 miles above Earth. Satellite telephone, e-mail and digital video kept them in touch thereafter until he returned.

Tarali, now almost 8 months old, is doing those typical things babies do at her stage in life, like sitting up, laughing and cutting teeth.

"I had a chance to do something as extreme as going to space to live and work," Fincke said. "Very few people have ever left the planet. It helps you realize that some of the best things in life are the typical things like changing diapers, reading to your kids or just listening to them. That's the real joy of life on Earth."