An Orbiting Partnership is Born

For more than a decade, American astronauts and Russian cosmonauts have been regularly living and working together in Earth orbit, first in the Shuttle-Mir program, and now on the International Space Station. This international partnership is the hallmark of modern space exploration, the backdrop for President Bush’s declaration that humanity’s future explorations of the cosmos must be “a journey, not a race" (+ Vision for Space Exploration).

But before the two Cold War-rivals first met in orbit in 1975, such a partnership seemed unlikely. Since Sputnik bleeped into orbit in 1957, there had indeed been a Space Race, with the U.S. and then-Soviet Union driven more by competition than cooperation. When President Kennedy called for a manned moon landing in 1961, he spoke of “battle that is now going on around the world between freedom and tyranny” and referred to the “head start obtained by the Soviets with their large rocket engines.”

But by the mid-70s things had changed. The U.S. had “won” the race to the Moon, with six Apollo landings between 1969 and 1972. Both nations had launched space stations, the Russian Salyut and American Skylab. With the Space Shuttle still a few years off and the diplomatic chill thawing, the time was right for a joint mission.

The Apollo-Soyuz Test Project would send NASA astronauts Tom Stafford, Deke Slayton and Vance Brand in an Apollo Command and Service Module to meet a Russian cosmonauts Aleksey Leonov and Valeriy Kubasov in a Soyuz capsule. A jointly designed, U.S.-built docking module fulfilled the main technical goal of the mission, demonstrating that two dissimilar craft could dock in orbit. But the human side of the mission went far beyond that.

The training leading up to the mission exposed the two crews to each other’s nations, helping to break down cultural and language barriers. As Brand said in a 2000 interview, amid the Cold War tensions, “we thought they were pretty aggressive people and … they probably thought we were monsters. So we very quickly broke through that, because when you deal with people that are in the same line of work as you are, and you’re around them for a short time, why, you discover that, well, they’re human beings."
( + Brand Oral History)

In a 1997 interview, Stafford described how they got around the language problem. “Each crew would speak his own language, and the other would have to understand,” he said. It just wasn’t working, until Stafford and the Russian backup commander had the idea to speak in the other’s language. “So we started,” he said, “and boy, it worked slick as a whistle."
( + Stafford Oral History)

On July 17, 1975, the five explorers and the two craft – launched two days before -- approached each other for docking. As Stafford guided the Apollo forward, Soyuz commander Leonov quipped “Tom, please don’t forget about your engine.” Just after noon EDT, with a live TV audience watching, the two craft finally met. “Soyuz and Apollo are shaking hands now.” 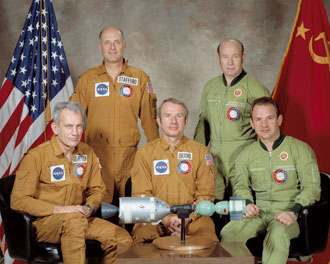 The crews received a congratulatory message from Soviet premier Leonid Brezhnev and a phone call from President Ford, who joked with astronaut Slayton about being the “world’s oldest space rookie.”

The 51-year old Slayton had been one of the “Original Seven” Mercury astronauts, but was grounded due to a heart condition. Finally cleared to fly on Apollo-Soyuz, Slayton reported, “it's been a great experience. I don't think there's any way anybody can express how beautiful it is up here.”

Apollo Commander Stafford had another unique cultural exchange for the cosmonauts. He’d gotten country music star Conway Twitty to record “Privet Radost,” a Russian version of his hit “Hello, Darlin.’” About an hour before the two craft undocked, the song was played from orbit and heard all over the world. Mission Control quipped that it “sounded like it was from far Western Oklahoma, around Kiev.

The Apollo crew returned to Earth on July 19, their Russian counterparts two days later. It would be two decades until the countries teamed up again with the Shuttle-Mir program, but the seed was planted. As Brand said, “I really believe that we were sort of an example … to the countries. We were a little of a spark or a foot in the door that started better communications.”

With Apollo-Soyuz and the cooperation that followed, the race was over. But the journey will go on.