The Rendezvous That Almost Wasn't

It was the late sixties. Young Americans were demonstrating in the streets against the war in Vietnam. The top song on the radio in July 1969 was "In the Year 2525." It was about peace and disputed whether the Earth could survive the ravages of man.

At NASA the focus wasn't on Earth - but on the moon as it had been since President John F. Kennedy announced Americans would go there. Planning for the venture began at NASA's first field center - Langley Research Center, home to the Space Task Group that conceived and directed the nation's first human-in-space program, Project Mercury. 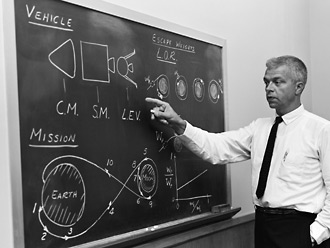 "At Langley, we did a lot of research," said John Houbolt, the Langley researcher who was instrumental in promoting lunar orbit rendezvous as the way to go to the moon. "We identified the possible problems. We built our simulators. We made analyses. So we had a lot of facts in our back pockets that could back up our contentions and notions."

Initially the great minds of American space science, including Wernher von Braun, favored a huge rocket - direct flight - to get to the moon and back.

"It was as big as an Atlas vehicle and, we know today that to launch that vehicle at Cape Canaveral takes a staff of 3,000 and a very complicated launch site control center," said Houbolt.

The plan was to send a vehicle the size of Atlas to the moon with absolutely zero help and land it backwards. Houbolt contended, "It can not be done."

Instead he proposed sending a craft up into space that would orbit the moon and include a smaller vehicle that could land there and return to the "mother ship."

"I said you must include rendezvous in your thinking -- to simplify, to manage your energy much better," he said.

The Langley engineer had figures to back up his claims, but still there was much resistance to lunar orbit rendezvous.

"It actually turned into a two-and-a-half year fight to convince people," he admitted.

However, Houbolt eventually won out and Langley went on to build many of the tools that supported his idea, including the rendezvous docking simulator used in the Gemini and Apollo programs. 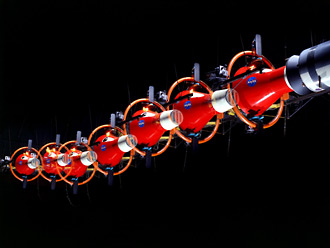 Image at left: NASA Langley's rendezvous and docking simulator, built to support the Gemini and Apollo programs, at work in a multiple-exposure image. Image credit: NASA

And on July 20, 1969, the day humans landed on the moon, where was John Houbolt? The Langley researcher who fought for lunar orbit rendezvous was in Houston in Mission Control.

"I had the privilege of sitting there and watching the whole mission. When the landing took place and the touch down was made, all of us stood up and started clapping," said Houbolt. "But at the same time we were shh, shh, because we didn't want to miss a fraction of a second of history being made. And von Braun sat in front of me and he made the okay sign and said, 'thank you, John.' That was one of the biggest rewards I've ever had."