Neil Armstrong. Buzz Aldrin. Michael Collins. Those are the names most people associate with the first humans to go to the moon. But behind the three Apollo XI astronauts were 400,000 Americans with the support of 20,000 industrial firms and universities. 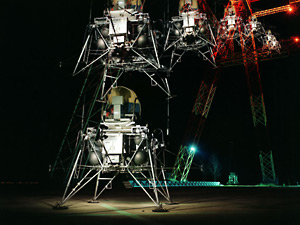 Image at right: Nighttime testing at the Lunar Landing Research Facility (LLRF). If you look closely, you can see the light green "X" on the ground that marks the astronaut's target. Image Credit: NASA

One of those in a support role was Lee Person, a research pilot who came to NASA's Langley Research Center in 1962 and worked there for more than 35 years.

"I came to Langley as a pilot thinking I'd be mainly involved with airplanes," said Person. He never dreamed he would be instrumental in Americans landing on the moon.

Person got to Langley about the same time crews started building the biggest Langley monument to Apollo - the Lunar Landing Research Facility. The structure, which in recent years has been used to crash test planes to make them safer, is 249 feet high and 400 feet long. At this massive vertical framework, the young pilot and others - including 24 astronauts - tested, refined and practiced moon landings in the Lunar Excursion Module (LEM) simulator.

Image at right: Neil Armstrong at the LLRF in a photo dated February 12, 1969. Just five months later, Armstrong would put everything he learned in training to use landing on the lunar surface. Image Credit: NASA

"The lunar landing research vehicle was about a 90-second flight article," said Person. "It took about an hour and a half to two hours to refuel it and turn it around for another flight. We would literally spend day after day down there."

An awkward looking spacecraft dangled from wires. Langley technicians set engine control and would-be astronauts learned to maneuver as if they were on the moon. Not only did the simulator re-create conditions men would find in one-sixth the gravity of earth, Langley even built a realistic moonscape - backlit to make the craters look deeper.

"The task was to look at the last 150 feet of descent onto the surface of the moon," said Person. "You'd start at some initial position in the vehicle and land on the X."

Person worked with all of the Apollo astronauts. "They would come in and we would talk to them about what we'd been doing," said the former research pilot. "Then we would watch them fly and get their comments. Eventually the engineers would go back and reformulate the things that we were doing and we'd try it again."