Remembering Apollo 1
On an ordinary Friday evening, Jan. 27, forty years ago, the Apollo launch team was hard at work at Launch Pad 34 on Cape Canaveral. A full dress rehearsal was in progress for the Apollo 1 mission, the first manned mission in the Apollo Program.

NASA astronauts Gus Grissom, Edward White and Roger Chaffee were strapped in their seats in their command module atop a Saturn IB rocket. Their mission would test this new spacecraft in Earth orbit. All future Apollo crews would rely on this capsule to see them safely on their journeys to and from the moon.

Gus Grissom was a local hero and one of the original seven Mercury astronauts selected in 1959. He made the second suborbital Mercury flight in 1961 and was one of the two-man crew on the Gemini 3 flight in 1965.

Ed White was selected as an astronaut in 1962. He made national headlines as NASA's first spacewalker during the Gemini 4 mission in 1965. 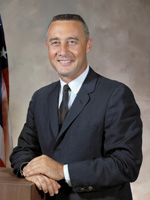 The rookie on the crew, Roger Chaffee was selected as an astronaut in 1963. Apollo 1 was his first flight assignment.

At 6:31 p.m., the unthinkable happened. The vehicle rocked twice as the alarm "Fire!" rang out from inside the capsule.

Pad personnel scrambled to reach the White Room, but just six minutes later when the inner hatch was opened, it was already too late. All three astronauts had died from inhaling carbon monoxide and other toxic gases generated by the flash fire.

In the accident's aftermath, the NASA family was distraught but determined to honor their fallen colleagues. 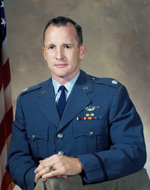 Flight Director Gene Kranz told his team at the Manned Spacecraft Center in Houston: "From this day forward, Flight Control will be known by two words: 'tough' and 'competent.' 'Tough' means we are forever accountable for what we do or what we fail to do," he said. " 'Competent' means we will never take anything for granted."

An accident review board later determined that the fire was caused by an electrical arc in an equipment bay following a momentary power outage. The investigation led to major design and engineering changes, making the Apollo spacecraft safer for the coming journeys to the moon.

Today, a small group of family and friends gathers at Pad 34 at sunset on the anniversary of the accident to remember these three dedicated astronauts. 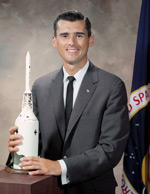 Chaffee's daughter, Sheryl, works as the administrative officer for Center Operations at NASA's Kennedy Space Center in Florida. "It has sometimes been hard for me to work here at KSC," she said, "but I am proud to follow in my father's footsteps as a NASA employee. He was proud of what he did for his country, and I know he would support NASA's mission to return men to the moon and on to Mars."

The NASA family pauses each January for a Day of Remembrance, honoring the fallen heroes of Apollo 1, Challenger and Columbia and all of those who have given their lives in the cause of exploration and discovery.