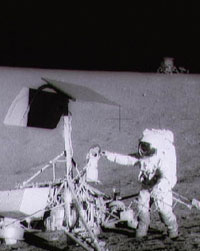 Image left: A historic view of two U.S. spacecraft on the surface of the Moon. Apollo 12 commander Pete Conrad with Surveyor in the foreground, with the lunar module Intrepid  in the background. Humans and robots will work together to explore the Moon again as part of the Vision for Space Exploration. Click for larger image. Photo credit: NASA.

Apollo 12 commander Pete Conrad and lunar module pilot Alan Bean would be on the Moon for more than 31 hours, with crewmate Dick Gordon orbiting above in the command module Yankee Clipper.

While a notable event in history, it was not the first time searing hot rocket exhaust had stirred things up at that spot. Nearly two and a half years prior, another spacecraft had made the journey from the Earth to the Moon's Ocean of Storms.

That robotic explorer, Surveyor 3, was one of many that NASA employed to blaze the trail for Conrad, Bean, and the other astronauts of Apollo. And though its batteries had long since been depleted, its antenna long since ceased transmitting, and its camera long since shut down, Surveyor was again enlisted in the exploration of humankind's final frontier.

"Neil and Buzz did great on Apollo 11, but they landed four miles long," said Conrad during a 1997 interview (Conrad died in 1999 from injuries sustained in a motorcycle accident). "To do the kinds of things the science guys wanted to do on the Moon, a lot of it near mountains and stuff, you had to prove you could pick a spot from about a quarter-million miles away and then go land on it. The Surveyor seemed like a good target."

Managed at NASA's Jet Propulsion Laboratory, the Surveyor program consisted of seven robotic lunar missions that were launched between May 1966 and January 1968. Five of the seven Surveyors successfully soft-landed on the lunar surface, demonstrating the feasibility of landing on the lunar surface, testing lunar soil properties and sending back over 86,000 images.

During their descent Conrad and Bean identified a five-crater formation called "Snowman" that NASA navigators were confident contained the Surveyor spacecraft, but neither astronaut actually saw the tubular, three-legged Moon robot. Five and a half hours after landing, Conrad's colorful first words from the surface crackled into Mission Control: "Whoopee! Man, that may have been a small one for Neil, but it's a long one for me." Moments later Conrad let out a high-pitched hoot --Surveyor 3 was less than 600 feet away.

"The Surveyor was right there, sitting at an angle in this crater," said Conrad. "But we had plenty of other stuff to do and had to wait until our second [moonwalk] to take a look."

Two hours into that excursion, Conrad and Bean negotiated the 13-degree slope of "Surveyor Crater" and made their way to the only human artifact ever encountered in lunar exploration. Surveyor 3's active lunar operations had lasted fifteen days in 1967. Conrad and Bean's time with the spacecraft was less than an hour. 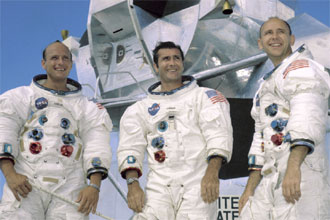 The two moonwalkers acted like a pair of unruly tourists -- fully sanctioned by NASA of course -- taking photographs anywhere they pleased and defacing property. They hacked pieces off the 10 foot-high Surveyor's exterior, including its TV camera and trenching tool, and kicked up and dug into the grounds surrounding the spacecraft.

Conrad and Bean also had something else in mind during their time with the 625-pound robot explorer. It wasn't fully sanctioned, but they were confident it would get them on the cover of Life magazine.

"After a flight the PR guys would look over the film and release the most newsworthy images to the press," said Conrad. "I put this Hasselblad camera timer in my flight suit on launch day so no one knew I had it and carried it all the way to the Moon. The plan was we were going to stand in front of the Surveyor and have our picture taken. We knew that they'd use it and eventually someone would ask, "Who took the picture?"

But Conrad and Bean transported the timer to the Surveyor site inside a bag that, by the time they arrived at the spacecraft, was already brimming with rocks and other samples. The duo did not want to let anyone in on the gag, in case it didn't work. 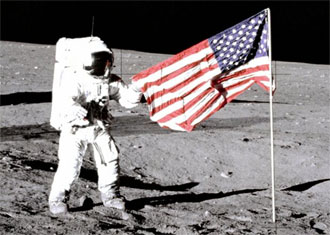 "So there we are, doing sign language to each other trying to find this thing. Al is trying to hold the rocks and everything while I'm digging around in the bag."

Conrad and Bean would eventually find the timer, but by then they were nearing the end of their second and last moonwalk and far away from the Surveyor.

Though the Apollo 12 moonwalkers did not bring home their prized surprise image, another one did land the mission on the cover of Life magazine. And still others, of an astronaut in a spacesuit interacting with a robotic explorer, provide an inspiring portrait of how manned and unmanned missions can work hand-in-hand, providing humankind with the tools and the spirit to explore.