The five members of the band were at the Johnson Space Center with a National Football League crew for filming related to their Sunday Super Bowl performance. Feb. 1 is the anniversary of the Columbia accident. Aerosmith's performance is to include a tribute to NASA and the Columbia crew. 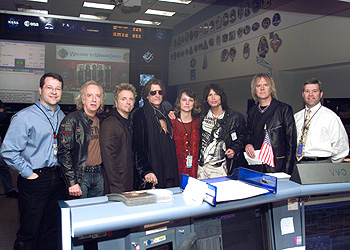 Image right: The Aerosmith band members with members of the flight control team in Mission Control at Johnson Space Center in Houston, Texas.

Tyler told Foale to call the group if they ever needed a band on the Space Station. He asked what the crew does on weekends.

"I think it's great that you're interested," Foale replied. "We're all interested in the same kinds of groovy stuff -- we just have to make it useful for people." Foale said much of their off-duty time is looking out the window. "You look at the world -- you look at the Earth. It's just never boring."

"We support and love what you guys are doing up there," Hamilton told Foale. "It's great."

After their visit to Mission Control, the five members of the band appeared briefly before about 1,000 employees gathered outdoors in Johnson Space Center's mall. 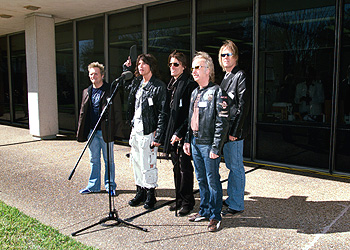 "Great love and great achievements involve great risks," Perry told the crowd. The crew doing what they're doing "and you down here supporting them -- it's phenomenal. Hats off to you all and thanks very much for letting us come here and see this."

Foale told the band about a spacewalk with fellow crewmember Alexander Kaleri next month -- the sights, the impressions and the night-and-day temperatures. Foale, a veteran of three spacewalks, said concentration on tasks is so intense that such experiences have to be recalled and enjoyed afterwards.

Roman Perry, 12, son of Joe Perry, asked about weightlessness. Foale said he had been uncomfortable in aircraft flights that provide about 25 seconds of weightlessness, but that spaceflight did not do that to him.

About 130 million U.S. viewers are expected to watch Aerosmith's Super Bowl performance and predictions call for a global television audience of about 1 billion.