Students Drop on a DIME 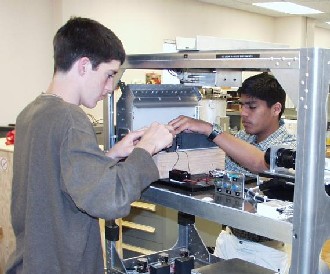 Image right: Students prepare their experiment for the DIME competition.

Despite the name, NASA's Dropping In a Microgravity Environment (DIME) competition doesn't sound anything like a coin hitting the floor. The thud of experiment packages being dropped in the Glenn Research Center's 2.2 Second Drop Tower and cheers from student teams make for a loud event.

In April of each year, Glenn hosts several teams of high school students for DIME Drop Days.  In 2004, sixteen teams submitted proposals and four teams made it to the final stage of the academic year-long program:

Each of these teams designed and constructed their science experiments for operation in the drop tower. This gives the students real-world experience in an actual NASA test facility. This is NOT your average science fair project!

"In the DIME program, students learn a fundamental lesson for space experiments -- microgravity; or 'weightlessness', can be created on the ground by dropping experiments in a free fall," said Richard DeLombard, DIME program creator and coordinator from the Glenn Research Center. "We hope this program will inspire the next generation of astronauts and project scientists by allowing students to perform their experiments in conditions similar to that in the shuttle and International Space Station." 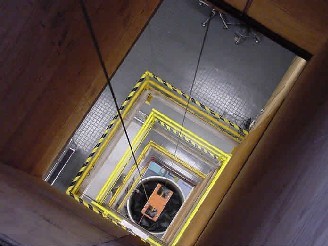 Image left: View down the shaft of the 2.2 Second Drop Tower at the Glenn Research Center.

DeLombard knows what it takes to be a project scientist. He once served in that role for the Space Acceleration Measurement System (SAMS), an operational space flight experiment developed by the Glenn Research Center to measure and record acceleration in low-gravity settings, including facilities on Earth, the space shuttle, and the International Space Station. He oversaw the development of the first SAMS units to measure and record vibrations created by such things as equipment operation, structural motion, crew movement, and thermal expansion.

The program is open to student teams in grades 9 - 12 from science classes, clubs or scout troops, and their advisors. To be eligible for participation, each group developed an experiment concept, prepared a proposal, and submitted the proposal to NASA by November 1. A panel of microgravity experts at Glenn selected the top proposals. These selected teams continued their experiment development and fabrication and then came to Cleveland to conduct their experiments in Glenn's world-class 2.2 Second Drop Tower. Topics include fluid flow, fluid surface tension, ultrasound levitation, and combustion dynamics.

"During their visit to Glenn, the student teams also participated in microgravity workshops, toured several facilities, and participated in a Self-Contained Underwater Breathing Apparatus (SCUBA) diving lesson at their hotel pool. The SCUBA activity was arranged as a simulation of the astronauts training in the neutral buoyancy facilities while training for space flight EVAs," DeLombard said. 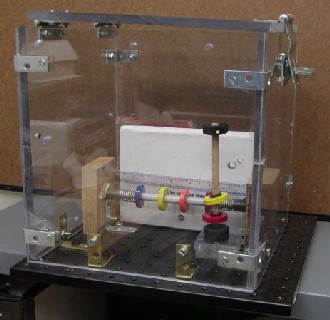 DIME was piloted in the 2001 school year for Ohio-based teams. The next school year, teams based in Glenn's six-state Great Lakes outreach area were eligible to participate. Beginning in 2003, the competition is nationwide, open for high-school-aged student teams located in all 50 states of the U.S., Washington D.C., and Puerto Rico. The planners are investigating options to allow more teams to compete in the future.

NASA provides expense-paid trips for five representatives of each selected team to attend DIME Drop Days in April at NASA Glenn Research Center in Cleveland, Ohio. The activities are Web-cast so that the home schools, parents and anyone with Internet access could observe the teams' activities in real time.

Information about DIME and related educator resources (available on a CD-ROM) by sending requests to: dime@grc.nasa.gov.

Images and Results from 2003 DIME competition

Images and Results from 2002 DIME competition

Images and Results from 2001 DIME competition