Neil Armstrong Shows How to Land on the Moon 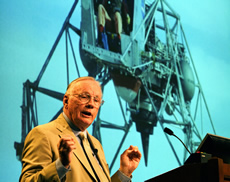 The problem: land an aerospace vehicle before you take off in it, and do it the first time ever on an unimproved field no human has ever visited. That's what Neil Armstrong faced when he guided Eagle to the moon's surface in July 1969.

Image right: The first man on the moon, Neil Armstrong, described the unorthodox training vehicle that taught him how to land on the lunar surface. Armstrong spoke to a packed hall during the Society of Experimental Test Pilots symposium in California September 29.

Armstrong brought an audience of 700 to the edge of their seats as he recounted his own precarious perch during testing of the lunar landing research vehicle (LLRV) intended to make that lunar landing possible. The Apollo 11 astronaut described the ungainly LLRV at the Society of Experimental Test Pilots (SETP) symposium in Anaheim, Calif., September 29.

With no atmosphere and only one-sixth the Earth's gravity, the moon presented unique operational challenges to the design of the piloted American space vehicle intended to go there safely. Forward-thinking engineers from what is now NASA's Dryden Flight Research Center in California proposed a training vehicle for astronauts that would simulate operating in a lunar environment. After rejecting existing helicopters and vertical takeoff jet aircraft, the best minds believed they could effectively subtract five-sixths of a lunar lander's weight on earth by using a gimbal-mounted jet engine thrusting straight down even as the lander pivoted and changed its own attitude for maneuvering. 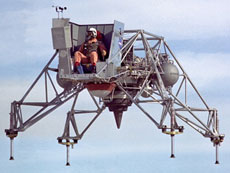 This matched the audacious planning underway at NASA's Langley Research Center to send a multi-part vehicle into lunar orbit, from which a lander would separate, touch down on the moon, and later return to lunar orbit for a do-or-die link-up with its command module for the return to Earth. That thinking was considered ludicrous in some circles, Armstrong said, because prophetic Langley planners came up with the complex idea at a time when "the U.S. had not even put a man in orbit."

Several elements within NASA joined Bell Aerosystems in creating the lunar landing research vehicle that would give astronauts the touch for landing in the lunar environment. Unglamorously called a flying bedstead, the LLRV was dependent upon its single downward-thrusting jet engine to maintain the illusion of lunar flight while smaller motors allowed for maneuvering. On a hot day in the Mojave Desert, the gravity-canceling jet engine could be taxed beyond its capabilities. Flights with less fuel weight, or missions scheduled in cool morning hours, could restore the jet’s abilities, Armstrong explained. Several NASA research pilots demonstrated the LLRV worked, and opened the door for similar lunar landing training vehicles - LLTVs - used by NASA in Texas to train Apollo astronauts.

Nobody ever accused the LLRV or LLTV of being fun to fly, and Armstrong said a lunar deceleration to landing was akin to "trying to stop a downhill putt on a fast green." The LLTVs were able to take advantage of maturing Apollo design tenets, and had controls more closely replicating those of the actual lunar modules to follow, he said.

Neil Armstrong said before he made his historic descent to the surface of the moon, he flew every iteration of lunar landing device from early test helicopters to the final LLTV, "including the Weber ejection seat… not by choice." When he experienced a loss of control in LLRV No. 1 in Texas, quick action saved his life as he ejected about 200 feet above the ground.

Armstrong's presentation conjured images of the best traits of NASA - unfettered engineers creating unorthodox solutions to daunting problems, while masterful pilots and astronauts learned how to survive both the rigors of lunar training and actual lunar missions nearly four decades ago. He finished his remarks with the hope that NASA's next generation of lunar explorers can benefit from a simulator program at least as good as the LLRV and LLTV that taught him to land on the moon.