The Last 300 Feet to the Moon
After making the 240,000-mile journey to the moon cruising through open space, the last 300 feet down to landing represented the most difficult and dangerous part of the Apollo missions.

The Apollo astronauts needed a way to practice that final descent and landing before Apollo 11 astronauts Neil Armstrong and Edwin "Buzz" Aldrin made the first historic moon landing in their lunar lander named Eagle on July 20, 1969. 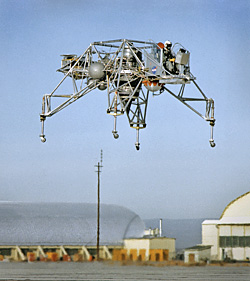 On the 35th anniversary of the first moon landing, it's worth looking back at the development of one type of the lander simulators, the Lunar Landing Research Vehicle, or LLRV.

Image right: An LLRV during a test flight in 1964.

At the start of the Apollo program in 1960, there were no simulators for would-be moonwalkers to learn the art and finesse of landing on the lunar surface. So, as the program got underway, NASA began planning for such simulators. Three types were developed: an electronic simulator, a tethered lander, and the ambitious NASA Flight Research Center (FRC) contribution, a free-flying vehicle. The three types became serious projects, and all contributed greatly to the success of Apollo.

The LLRVs, humorously referred to as flying bedsteads, were used by the FRC, now known as the NASA Dryden Flight Research Center, at Edwards Air Force Base, Calif., to study and analyze piloting techniques needed to fly and land the Apollo Lunar Module in the moon's airless environment.

Neil Armstrong, first human to step onto the moon's surface, said the mission would not have been successful without the type of simulation provided by the LLRVs and LLTVs.

Built of aluminum alloy trusses, the vehicles were powered by a 4,200-pound thrust General Electric CF-700-2V turbofan engine mounted vertically in a gimbal. The engine lifted the vehicle to the test altitude and was then throttled back to support five-sixths of the vehicle's weight, simulating the reduced gravity of the moon. Two hydrogen peroxide lift rockets with thrust that could be varied from 100 to 500 pounds handled the vehicle's rate of descent and horizontal movement. Sixteen smaller hydrogen peroxide thrusters, mounted in pairs, gave the pilot control in pitch, yaw and roll. As safety backups, six 500-pound thrust rockets could take over the lift function and stabilize the craft for a moment if the jet engine failed. The pilot had an ejection seat that would then lift him away to safety. 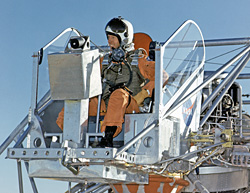 After testing at the FRC, the LLRVs were sent to Houston, where research pilots learned to become LLTV instructor pilots. In December 1967, the first of the LLTVs joined the LLRVs to eventually make up the five-vehicle training and simulator fleet.

Modifications to some of the vehicles gave astronauts a three-axis side control stick and a more restrictive cockpit view, both features of the real lunar module that they would later fly down to the moon's surface.

During training flights at Houston, three of the five vehicles were destroyed in crashes; LLRV No. 1 in May 1968 and two LLTVs in December 1968 and January 1971. Neil Armstrong was one of the pilots who ejected to safety following an engine failure.

Donald "Deke" Slayton, then NASA's chief astronaut, later said there was no other way to simulate a moon landing except by flying the LLTV.

The final 300-foot descent to the lunar surface was the last major step in the journey to the moon, leading to Armstrong's incredible first step there 35 years ago.

Additional photos of the Lunar Landing Research Vehicle (LLRV) can be found at http://www.dfrc.nasa.gov/Gallery/Photo/LLRV/index.html.

Quicktime movie clips of the LLRV can be found at http://www.dfrc.nasa.gov/Gallery/Movie/LLRV/index.html.