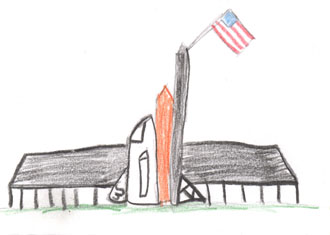 Ryan from the Ashley Elementary School of New Baltimore, Michigan drew this image as a condolence message after the loss of the Columbia crew on February 1, 2003.

Construction on the Columbia Elementary School, which will be located at Rider Street and Haines Street in Mead Valley, is scheduled to begin in June 2003. Doors will open to students in August the following year.