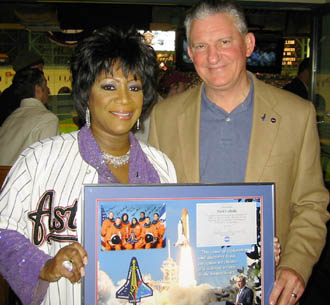 Patti LaBelle and JSC Center Director Jefferson D. Howell Jr. at the opening day of the Houston Astros. The Astros will honor the Columbia crew by wearing the STS-107 patch on their uniforms all year. Photo credit: NASA/Doug Whitehead

The spirit of the Space Shuttle Columbia was with the Houston Astros as they launched their 2003 season with seven simultaneous "first" pitches thrown by family and friends of the Columbia crew.

The Astros baseball team, originally named in honor of the U.S. space program, is honoring the seven STS-107 astronauts by wearing their mission patch all year.

Opening Day at Minute Maid Park in Houston on April 1 brought a 10-4 victory for the home team over the Colorado Rockies. It also brought tears to the eyes of many in the sold-out crowd. Pre-game ceremonies began when 107 members of the NASA family, including flight controllers and others involved in Columbia’s final mission, carried a U.S. flag onto the field. A bald eagle soared overhead as the national anthem, performed by Hootie and the Blowfish’s Darius Rucker, rang through the stadium.

Singer Patti LaBelle performed the song "Way Up There," just as she had in February at a memorial in Washington for the Columbia seven. As she sang, the crowd watched an emotional video dedicated to the crew.

The musical tribute continued during the seventh-inning stretch. The 13-year-old niece of Columbia pilot Willie McCool thrilled the crowd with her rendition of "God Bless America." The day also brought a surprise for the Columbia families: a visit with Astros fan and former President George H. W. Bush.

NASA's long connection with the Astros will continue when it's time to return to flight. The team presented NASA’s Bob Cabana, a former astronaut, with a team jersey, cap, and baseball to be taken into space on the next Shuttle mission.

The Astros and two corporate sponsors, Hewlett-Packard and KTRH-740AM radio, also presented the Columbia Family Fund with a $20,000 donation.

"This incredible gesture from the Houston Astros is further evidence of the outpouring of support we continue to see from NASA's extended family in Texas and Louisiana," said Administrator Sean O'Keefe, who was in town for the game. "To this day, entire towns come out to support debris recovery efforts and it's really heartening for all of us at NASA to know that there's such great enthusiasm for the continued exploration of space."

+ View the video of the season opener

+ View the photo gallery of the season opener

NASA commissioned Tena R. Clark to write "Way Up There" to commemorate the Centennial of Flight. Patti LaBelle sang the song in tribute to the Columbia crew at the Feb. 6 memorial service at the National Cathedral.