Celebrating the First Manned Apollo Mission
"She is riding like a dream." So said mission commander Walter Schirra as Apollo 7 rocketed into history on Oct. 11, 1968. 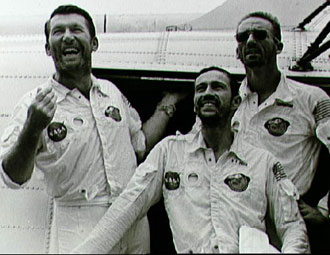 Once Apollo 7 cleared the pad, a three-shift mission control team-led by flight directors Glynn Lunney, Eugene Kranz and Gerald D. Griffin in Houston took over. A little more than 10 minutes into its mission Apollo 7 reached the first stage of its journey, an orbital path above the Earth.

NASA marked the anniversary Wednesday by re-opening the historic control room used for the mission. It's been updated and will now support International Space Station operations.
+ Read More

During the mission, The Apollo vehicle and the Command Service Module performed superbly. Durability was shown for 10.8 days -- longer than a journey to the Moon and back. With few exceptions, the other systems in the spacecraft operated as they should. Most components supported the operations and well-being of the spacecraft and crew as planned, in spite of minor irritations like smudging windows and puddling water. 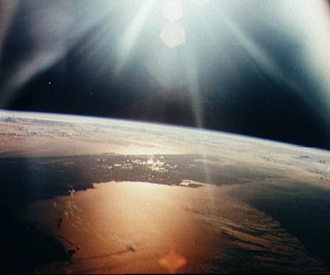 Image left: The morning sun reflects on the Gulf of Mexico and the Atlantic Ocean as seen from the Apollo 7 spacecraft during its 134th revolution of the earth. Photographed from an altitude of 120 nautical miles, at ground elapsed time of 213 hours and 10 minutes. Image credit: NASA.

Apollo 7 accomplished what it set out to do -- qualifying the command and service module and clearing the way for the proposed lunar-orbit mission to follow. And its achievement led to a rapid review of Apollo 8's options. The Apollo 7 astronauts went through six days of debriefing for the benefit of Apollo 8, and on Oct. 28 the Manned Space Flight Management Council investigated every phase of the forthcoming mission. By November 1968, nearly all the skeptics had become converts.

For more information on the Apollo program, visit www.nasa.gov/apollo.

For more Apollo imagery, visit http://spaceflight.nasa.gov/gallery/images/apollo/index.html.
› Back To Top