Wind Energy Research Reaps Rewards
We've all been tempted. Some of us have tried it more than once.

For some reason, it never crossed Larry Viterna's mind to type his own name into a search engine until late last year. An accomplished NASA engineer and manager with a Ph.D., he could expect to find plenty of entries.

But when Viterna finally Googled himself, he could hardly believe the results: hundreds of references to an analytical model he developed in 1981 to predict the power generated by wind turbines during high winds. These clean and efficient machines look like enormous fans and convert wind into electricity. 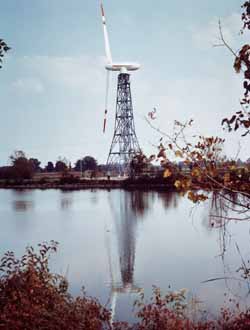 At the time of publication, wind energy experts had dismissed his theory. "It was quite controversial because it contradicted existing theories," Viterna said. "I was known around the world as a bit of a quack."

Viterna and NASA got involved in wind energy during the energy crisis of the 1970s. Increased consumption and an oil embargo against the United States and other western countries had contributed to record-high gas prices and lines at the pump. In response, President Richard Nixon set up a federal task force to explore renewable energy sources, such as solar panels, hydrogen and wind turbines.

From 1974 to 1981, NASA's Glenn Research Center in Cleveland, Ohio, led the U.S. Wind Energy Program for large horizontal-axis wind turbines -- the most popular systems used today. The center's mission was to develop the technology and transfer it to private industry.

"It was a fun project," said Viterna, who led the aerodynamics team from 1978 to 1981. "Wind energy was a very hot topic. It was key in the minds of Americans, and we were right in the middle of leading the effort."

In 1981, a group of engineers in Denmark contacted NASA Glenn about a problem they were having with fixed-pitch wind turbines -- turbines with blades that do not change position.

"The performance didn't make sense," Viterna said. "Nobody could predict the relationship between wind speed and power. That's effectively a major design flaw."

To address the issue, Viterna and research engineer Bob Corrigan began running tests on the Plum Brook turbine. Corrigan changed the pitch of the blades to match the machine in Denmark, and Viterna used data from the tests to reverse engineer an analytical model to predict power in high winds. Viterna and Corrigan presented the model that year at an international workshop, where it received a tepid response. 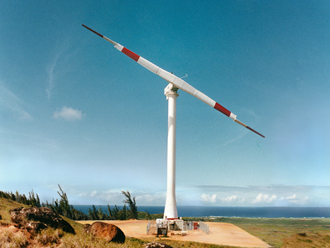 The wind energy program ended later that year, and both engineers moved along in their careers. Viterna became NASA Glenn's Lead for Center Strategy and Business Development, and Corrigan went on to manage an International Space Station support project.

Image left: This 3.2 megawatt wind turbine in Oahu, Hawaii, was once the largest in the world. It is still used commercially today. Credit: NASA

Neither of them thought much about the paper until, on a whim, Viterna searched the Internet for his name and the word "wind." Experts in the wind energy field commonly referred to the analytical model as "Viterna & Corrigan" or "the Viterna method."

"I couldn't believe it," he said. "It had become the leading method for predicting wind turbine performance, and I had no idea this was going on."

Corrigan was just as surprised. "When Larry told me, I said 'you're kidding me.' It made me feel good that something we did back then is still used today and by such a large audience," he said.

Twenty-five years after publishing their paper, the two engineers are being recognized for their work. Both of them received a Space Act Award from NASA's Inventions and Contributions Board. And in June, Viterna will accept a Blue Marble Award at NASA's Environmental and Energy Conference.

To top it all off, last August, the Department of Energy approved the code as part of its design tools for worldwide certification of wind turbines.

With recent rises in the price of oil and concern growing over pollution, Americans again are turning their attention to alternative sources of energy. Many experts believe that wind is one of the most promising options. As the wind power industry grows, the Viterna method will surely be an important tool for turbine designers everywhere.