It's a Tankless Job
It's hiding in your home, probably in a closet or dark corner of the basement. You depend on it daily, but don't give it much thought until you become too demanding and it lets you down. It's your water heater, and thanks to some space-age technology, someday soon it just might be obsolete.

In most homes, having hot water when you need it means keeping a big heating tank at the ready -- day and night, 365 days a year. That means wasted energy. And at times of peak use – while doing multiple loads of laundry, running the dishwasher and supplying several showers -- the tank just can't meet all the demands at the same time.

One solution is the tankless water heater -- a phonebook-sized device that provides hot water on demand by heating the water as it is used.

The idea isn't new, but design flaws in the past kept the devices from being efficient enough to accommodate the needs of an entire house. That's before Space Age know-how was applied to this problem on Earth through a partnership between NASA and private industry.

Image at Left: The wall-mounted SETS tankless water heater is about the size of a phonebook and can supply the hot water demands of an entire house thanks to help from NASA technology. Image credit: SETS Systems

SETS Systems, Inc. of Miami uses computer-chip technology to manufacture electronic, tankless water heaters built to serve an entire home, even during simultaneous uses. And even better, the heaters are designed to save up to half of the energy cost of heating the hot water in a traditional tank. 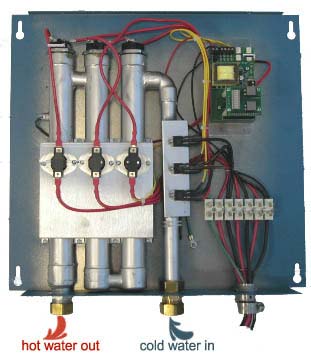 Several years ago, the company faced a problem with the tank's flow switch that was tough to solve. Several expensive studies by testing and engineering firms produced only graphs and printouts, but no solutions. Then company founder Carlos Cabrera turned to an innovative technology outreach program offered through NASA's Kennedy Space Center and the state of Florida.

To apply scientific and engineering expertise originally developed for space applications to the problem, the program matched his company with a veteran space engineer at Kennedy. Casting an expert eye on the trouble, the engineer identified the problem within the tank's flow switch in just 30 minutes. The fix he came up with was simple but priceless. Not only did the new design pass the rigors of testing by working flawlessly, but it was cheaper to make and could be retrofitted into the older-model heaters, as well.

Just how dependable did the unit prove to be? In a mobile shower trailer used by rescue workers at New York's "ground zero" after the Sept. 11 terror attacks, each unit supported 100 to 200 showers per day for a period of three months. Currently hurricane relief workers in Gulfport, Miss. are using these showers. 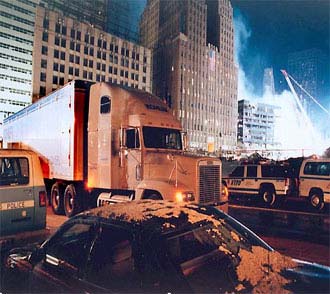 Image at Left: The Kohler Mobile Shower Truck provided on-site showers for workers at the Red Cross Rescue Center near the World Trade Center site. Powered by a generator, with water supplied by a fire hydrant, the self contained nine-shower unit had an unlimited supply of hot water thanks to the SETS tankless water heaters. Image credit: SETS Systems

So when the company wanted to upgrade its computer-controlled technology, Cabrera's team knew just where to turn. In 2003, SETS Systems once again drew on the expertise at Kennedy Space Center. Through the Space Alliance Technology Outreach Program, the company received recommendations for improving its microprocessor, programming techniques and design. These innovations allowed SETS Systems to produce an improved product for the same manufacturing costs.

So while it doesn't take a rocket scientist to produce hot water, it doesn't hurt to have one on your team when you want to improve the process.