Blockbuster Technology
Whether they're set "a long time ago in a galaxy far, far away" or somewhere in our solar system centuries from now, Hollywood blockbusters often take us to new worlds in extraordinary spacecraft.

They can travel faster than the speed of light, create their own onboard gravity and tap into endless supplies of power. But just how realistic are these science-fiction marvels? 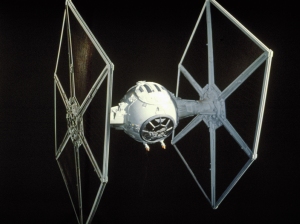 Throughout history, the grand visions of science fiction have inspired scientific breakthroughs. In the 1800s, for example, Jules Verne wrote "From the Earth to the Moon," a story about sending people to the moon by blasting them out of a giant cannon.

The novel inspired a generation of rocketry pioneers. Among them was a young Wernher von Braun, who sketched his visions in notebooks. Just a century after Jules Verne's inspirational book was published, von Braun led NASA's development of the Saturn rockets, which carried people to the Moon.

Like Verne's giant cannon, vehicles from movies, such as "Star Wars" and "Star Trek," can sometimes inspire thoughtful experiments and highlight interesting possibilities for further study.

"At NASA, our job is to push the boundaries of possibility," he said. "Science fiction shows us things that are beyond the realm of the possible -- today, that is." 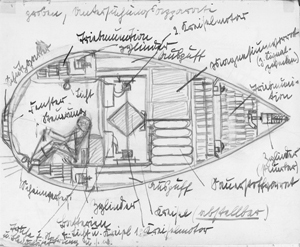 Many casual fans of the original "Star Wars" trilogy know the Empire's arsenal included TIE fighters, interceptors and bombers. Some even know that TIE is an acronym for "twin ion engines" -- but few realize that this technology actually exists.

Also called electric propulsion because of its dependence on electricity from solar or nuclear power systems, ion propulsion has been around since the 1950s. Dr. Harold Kaufman, an engineer at Glenn (formerly Lewis) built the first ion engine in 1959.

Ion propulsion uses electricity to produce plasma from xenon gas -- the same gas found in photo flash bulbs. Ions from the plasma are extracted and then accelerated at extremely high speeds. In space, as the xenon ion beam rushes from the thruster, it propels the spacecraft in the opposite direction, leaving a trail of blue light behind it. Many of the spacecraft in "Star Wars: Episode III" have the same blue glow coming from their engines.

NASA's Deep Space 1, which launched in 1998, was the first spacecraft to use an ion engine as its primary propulsion. Powered by the Sun, Deep Space 1 could hardly keep up with a TIE fighter. Though NASA is working to increase the size of ion engines for future space exploration, matching the Empire's fleet would require major advances in power generation.

Some science fiction vehicles, like "Star Trek's" U.S.S. Enterprise rely on antimatter as an energy source. Though it sounds fictitious, antimatter -- or matter with its electrical charge reversed -- really exists.

Studies have determined that even small quantities of antimatter could improve rocket performance. But for serious applications, a milligram of antimatter would be required.

"If a milligram doesn't sound like much," Millis said, "consider that it would cost about $100 billion dollars to create one milligram of antimatter with today's equipment."

While the ion and antimatter propulsion systems of movie spacecraft are based on science facts, other movie marvels are merely science fiction. Han Solo's Millennium Falcon, for example, uses "hyperdrive," and "Star Trek's" Enterprise has "warp drive." Both of these fictional systems propel the vehicles through space faster than the speed of light -- a common occurrence in movies. But most scientists still consider travel at warp speed impossible. 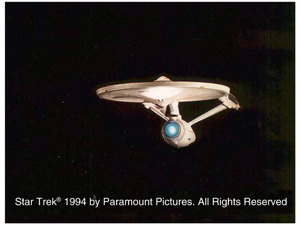 Image left: Picture of the U.S.S. Enterprise from "Star Trek: The Next Generation." Credit: Paramount Pictures

Occasionally, though, NASA assesses such long-range, revolutionary possibilities. The Breakthrough Propulsion Physics Project, for example, was supported from 1996 to 2002. It examined the possibility of three breakthroughs in space transportation: propelling a vehicle without propellant, attaining the maximum transit speeds physically possible, and creating new energy production methods to power such devices. The results of this research are available on the project's Public Information Site.

So, will we ever travel faster than the speed of light? For now, we don't know enough about physics to answer that question.

"Real science is often slower than science fiction," Landis said. "You can't schedule breakthroughs on your calendar, but you can keep on doing research and working to discover new principles of physics that might someday allow us to go beyond the boundaries we know."

In the meantime, we need visionaries to continue exploring the possibilities. Movies like "Star Wars" and "Star Trek" help to inspire the children who will become the von Brauns and Kaufmans of tomorrow.