Seeing Into the Past
The description of the discovery reads like the opening scene of a big-screen adventure:

The year is 1947. In the barren hills surrounding the Dead Sea, a shepherd searching for his lost goat stumbles upon a discovery that echoes across time.

In a cave, untouched for 2,000 years, he finds jars filled with ancient scrolls.

This isn't the plot for another Indiana Jones movie. These are the Dead Sea Scrolls, and almost 60 years after the first scroll was discovered, religious scholars, archeologists, and scientists still haven't unlocked all of their secrets or agreed upon their significance. But NASA technology developed to study other worlds provided a key to reading these ancient manuscripts by offering a better tool to see beyond what is visible to the eye.

All told, the remnants of more than 800 scrolls were ultimately found hidden in 11 cliff caves along the northwestern shore of the Dead Sea. And while some of the scrolls were relatively intact, thousands of fragments also were recovered. Among these writings are the oldest known text of the Hebrew canon, known to Christians as the Old Testament -- the underpinning of both Judaism and Christianity. The manuscripts date to the time of Jesus of Nazareth, and their survival and amazing discovery are deemed truly remarkable.

But 2,000 years and exposure to the elements since their discovery has made discerning the characters written in black ink against age-blackened papyrus one of the big challenges. Traditional methods use film-based infrared photography to reveal hidden characters, but that method has its limits.

So in 1993, NASA researchers brought together the ancient and the space-aged through digital infrared imaging.

"What digital infrared imaging allows us to do is to look at the scrolls in a narrow wavelength band," says Gregory Bearman, research scientist at NASA's Jet Propulsion Laboratory in California. "In some cases, this reveals detail that a film-based camera looking at a broader wavelength spectrum cannot see." 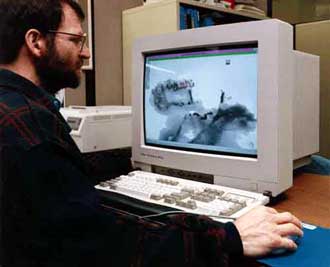 Bearman was invited to Jerusalem to examine the scroll known as the Genesis Apocryphon. By using a multispectral camera outfitted with a liquid-crystal filter designed to rapidly change wavelengths, never-before-seen text in the scroll became visible. Digital images were then fed into a computer with image-processing software to further sharpen the photographs. The result: 20 centuries of the past were brought into crystal clarity.

Image at Left: Gregory Bearman, research scientist at NASA's Jet Propulsion Laboratory, examines an image from one of the scrolls on a computer screen. Image credit: NASA/JPL

"Through the use of multispectral techniques, it was possible, despite the decay of 20 centuries, to read the treasure of these long-hidden writings. With this technique, the group found text never previously seen," said Bearman.

The liquid-crystal tunable filter was developed by Cambridge Research and Instrumentation, with help from a Small Business Innovation Research contract through NASA's Jet Propulsion Laboratory. The filter functions something like an electronic "wheel," providing a wider range of colors with no distortion of image between wavelengths. Through the research contract, the company developed a new class of these filters for small, low-cost imaging spectrometers that have a host of applications. 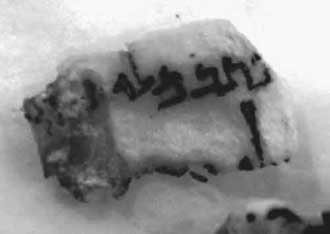 Image at Right: Ancient words were revealed and studied as never before possible. One line of Hebrew letters brought to light by NASA technology translates into "he wrote the words of Noah." Image credit: NASA

So while high-tech tools are used to discern the text written ages ago on these ancient scrolls, their meaning and significance will no doubt continue to be debated among scholars and theologians of two faiths who share common roots reconfirmed by the scrolls.