NASA Develops a Nugget to Search for Life in Space

Astrobiologists, who search for evidence of life on other planets, may find a proposed Neutron/Gamma ray Geologic Tomography (NUGGET) instrument to be one of the most useful tools in their toolbelt. 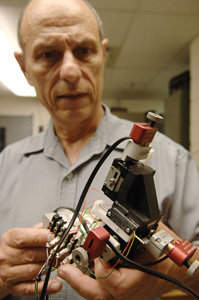 Image right: Principal Investigator Sam Floyd holds the device that will be used this summer when he and his team test the NUGGET concept at the National Institute of Standards and Technology in Gaithersburg, Md. Click on image to enlarge. Credit: NASA

As conceived by scientists at the Goddard Space Flight Center (GSFC) in Greenbelt, Md., NUGGET would be able to generate three-dimensional images of fossils embedded in an outcrop of rock or beneath the soil of Mars or another planet. Tomography uses radiation or sound waves to look inside objects. NUGGET could help determine if primitive forms of life took root on Mars when the planet was awash in water eons ago.

Similar to seismic tomography used by the oil industry to locate oil reserves beneath Earth’s surface, NUGGET would look instead for evidence of primitive algae and bacteria that fossilized along the edges of extinct rivers or oceans. As on Earth, these remains could lie just a few centimeters beneath the surface, compressed between layers of silt. If a mechanical rover that explores planet surfaces were equipped with an instrument like NUGGET — capable of peering beneath the surface — then it might be able to reveal evidence of life beyond Earth.

“This is a brand new idea,” said Sam Floyd, the principal investigator on the project, funded this year by Goddard’s Director’s Discretionary Fund. If developed, NUGGET would be able to investigate important biological indicators of life, and quickly and precisely identify areas where scientists might want to take samples of soil or conduct more intensive studies. “It would allow us to do a much faster survey of an area,” Floyd said.

The proposed instrument, which could be carried on a rover or a robot lander, is made up of three fundamentally distinct technologies — a neutron generator, a neutron lens, and a gamma-ray detector. 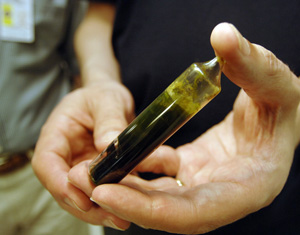 Image left: This sealed tube contains a bacterial ecosystem which can form layered structures such as by the rock shown in the image below. Click on image to enlarge. Credit: NASA

At the heart of NUGGET is a three-dimensional scanning instrument that beams neutrons into a rock or other object under study. When the nucleus of an atom inside the rock captures the neutrons, it produces a characteristic gamma-ray signal for that element, which the gamma-ray detector then analyzes. It’s also possible to plot the location of the elements.

After this process, information can then be turned into an image of the elements within the rock. By seeing images of certain existing elements, scientists could tell whether a certain type of bacteria had become fossilized inside the rock.

Although the concept of focusing neutrons is not new, the ability to focus them is. Thanks to a Russian scientist who devised the method in the 1980s, scientists today can direct a beam of neutrons through a neutron lens made up of the thousands of long, slender, hair-size glass tubes. The bundle of tubes is shaped so that the neutrons flowing down them can converge at a central point. Since the method’s invention in the 1980s, manufacturing practices have made this type of optical system feasible for space exploration.

The advantage of this technology is that it can create a higher intensity of neutrons at a central point on the object. This increased intensity allows a higher-resolution image to be produced. 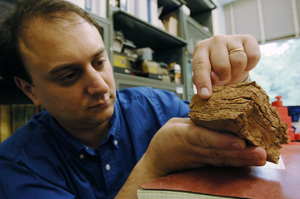 Image right: Jason Dworkin, an astrobiologist at the Goddard Space Flight Center in Greenbelt, Md., holds a stromatolite, a layered sedimentary rock formed by bacteria eons ago. If such a rock were discovered on Mars, it could indicate that primitive life had once taken root on the red planet. Click on image to enlarge. Credit: NASA

Floyd and his co-investigators, Jason Dworkin, John Keller, and Scott Owens, all from NASA GSFC, plan to conduct experiments this summer at the National Institute of Standards and Technology (NIST) using one of NIST’s neutron-beam lines. By focusing neutrons into various samples (one of which is a meteorite), they hope to make a three-dimensional image of the meteorite's internal structure.

“If we’re successful, we’ll be in position to say whether a space flight instrument is feasible,” Floyd said, adding that his research should give Goddard the lead role in developing a new class of instruments to support missions for NASA's search of life in the future.

Learn more on the Internet:
+ What are stromatolites in fossils?
http://learn.arc.nasa.gov/microbe/page2.cfm


+ What are microbial mats?
http://learn.arc.nasa.gov/microbe/page1.cfm

+ Learn why NASA's search for life in the Universe begins at home:
http://learn.arc.nasa.gov/microbe/page4.cfm