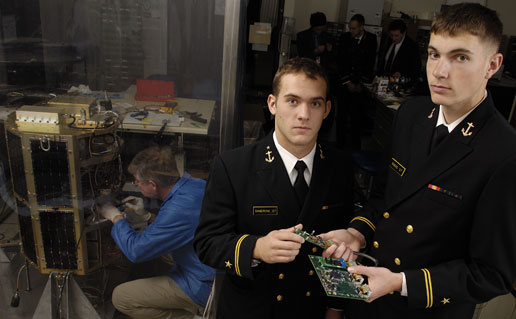 A partnership between NASA and the U.S. Naval Academy is offering students real-world experience. During 2007 and 2008, students at the U.S. Naval Academy in Annapolis, Md., will build a satellite called "MidSTAR-2" through a U.S. Department of Defense program that will carry four experiments into space in 2011 to look at different parts of Earth's atmosphere, gamma rays and solar winds.

Scientists at the NASA Goddard Space Flight Center in Greenbelt, Md., are taking advantage of the opportunity to carry promising technologies into orbit for evaluation.

The NASA experiments that will fly on MidSTAR-2 are part of the Internal Research and Development Program at NASA Goddard. "The NASA-Naval Academy partnership is extremely exciting," said Professor Billy R. Smith, Director of the U.S. Naval Academy's Small Satellite Program. "We get the benefit of their experience in building satellites and in return make a genuine contribution to their cutting-edge space research. It is this, more than anything else, that elevates our program above the simple student project level and makes it real for the midshipmen." 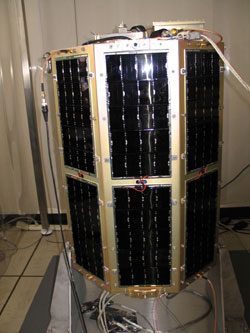 MidSTAR is a relatively low-cost type of satellite that will fly small instruments into space. The MidSTAR project at the U.S. Naval Academy is part of the Small Satellite Program. That program uses technical assistance from NASA, the Computer Sciences Corp, CNS Systems Inc., the U.S. Naval Research Laboratory and Honeywell. All of these helped build MidSTAR-1 with a grant from the Boeing Corporation. Once the satellite is built, it is approved by the U.S. Department of Defense (DOD) and launched through their Space Test Program.

Currently, Navy men and women are building their second satellite MidSTAR-2, which will carry four different instruments or "payloads" for NASA and two for the DOD Space Test Program. "This type of spacecraft is intentionally simple in design and rugged in construction, using commercial off-the-shelf 'plug-and-play' parts as much as possible," said Midshipman First Class Jillian Trimboli, the student mission manager for the class of 2007 design team.

NASA really benefits from the U.S. Navy's satellite program, because NASA gets to send instruments into space without waiting for another mission. "This is a program where everyone wins," said Dan Powell, MidSTAR program manager at NASA Goddard. "Students get an opportunity to build and integrate a satellite bus and our scientists' instruments get a free ride." 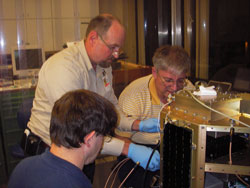 Image right: Keith Hogie (front) and Jim Langston (center) of The Computer Sciences Corporation (CSC) assist Dr Smith in the installation of the MidSTAR-1 communications system. MidSTAR-1 uses internet protocols for the transfer of data files to and from the spacecraft. Click on image to enlarge. Credit: USNA

"We get to do together what we could never have done separately," added Smith.

Four instruments are set to fly on MidSTAR-2. They will look at the Earth's thermosphere, gamma rays and solar winds.

The Remote Sensing of the Thermospheric Temperature instrument will be used to take the temperature of Earth's thermosphere to determine how much it can slow low-altitude spacecraft. The thermosphere is Earth's outermost layer of atmosphere, located from 80 to 550 km (approx. 50 to 340 miles) above the surface. Its temperature is dependent on the sun. When the sun is active, temperatures can soar to 1,500C (2,732 F) or higher. Because of the thin air, scientists can't measure temperature directly, so they measure density of the air by seeing how much drag it puts on satellites.

The Gamma-Ray Burst Polarimeter will study gamma-ray bursts. Gamma-ray bursts are the most powerful energies known to man, given off by supernovas and black holes. This instrument will provide a good test for a new X-ray polarimeter in development and can reveal much about the areas around neutron stars or black holes.

The Miniature Imager for Neutral Ionospheric Atoms and Magnetospheric Electrons or "MINI-ME," could improve understanding on how the sun's solar wind (energy particles ejected from the sun, some of which come toward the Earth) interact with solar system planets and parts of Earth's atmosphere. The ionosphere and the magnetosphere are outer layers of the Earth's atmosphere that interact with the solar wind. One day, these instruments could help explain why Venus lost its water and whether conditions at Europa, Jupiter’s moon, can support life. 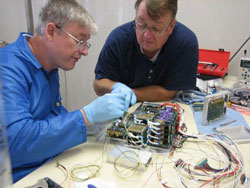 The Plasma Impedance Spectrum Analyzer or PISA instrument will measure the amount of electrons (tiny charged particles) and the temperature in Earth’s upper atmosphere. That will help scientists understand the ways that solar wind from the sun affects Earth's upper atmosphere. Solar winds can affect radio waves, making navigation and communication difficult.

If one of those four instruments doesn't make it on the satellite, a replacement experiment will be placed onboard. That instrument is called a "Combined Neutron, Gamma-Ray and Particle Radiation Detector." This instrument could reveal more about the chemicals found on the surfaces of other solar system objects, such as planets.

For information about the MidSTAR program, please visit on the Web: http://web.ew.usna.edu/~midstar/.

For more information about the four technologies to fly aboard MidSTAR-2, please visit: http://gsfctechnology.gsfc.nasa.gov/Payloads2Fly.htm.