Liquidmetal: Redefining Metals for the 21st Century
A revolution in metals has arrived. NASA, the California Institute of Technology (Caltech) and the U.S. Department of Energy united to help develop a new building material. "Liquidmetal" is a type of alloy, a mix of three or more metals, with characteristics similar to plastic that cools quickly and has more than twice the strength of titanium. 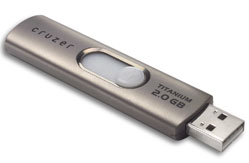 Image to right: SanDisk Corporation, the world’s largest supplier of flash storage card products, has introduced their latest SanDisk Cruzer® Titanium flash drives featuring the Liquidmetal alloy for its case. With more than twice the strength of titanium and the ability to precision net shape cast the high tolerance part, the Liquidmetal® Alloy provides the flash memory drive with the strongest case that withstands scratching, and wear and corrosion. Credit: Liquidmetal Technologies

It has long been thought that plastic and steel were the best materials to use in building large products that might be used for aerospace and space exploration applications. These new "shapeless alloys" combine the strength of steel with the molding capability of plastic.

Johnson began working in the field in the early 1980s with colleagues at NASA's Jet Propulsion Laboratory. NASA and Liquidmetal Technologies cooperated on research using the microgravity conditions available flying on the space shuttle. Extensive experiments on liquid metals were conducted onboard the International Microgravity Laboratory flight in 1994 and again in 1997 on the Microgravity Science Laboratory mission. The work was sponsored by NASA, CalTech and the U.S. Department of Energy to create new materials for aerospace.

Image to left: The leading manufacturer of baseball sports equipment, Rawlings Sporting Goods Company, Inc, an Official Supplier to Major League Baseball for over 30 years, has teamed with Liquidmetal® Technologies to introduce a new standard in high-performance materials to the world of baseball products. Liquidmetal engineers and Rawlings designers developed a baseball bat that offers superior durability while dramatically reducing the energy loss experienced with other materials upon impact with the ball. Liquidmetal technology is currently exclusive to Rawlings for baseball and softball bats. Credit: Liquidmetal Technologies

Johnson and Peker were able to create a new form of mixed metals that went from a liquid to a solid at room temperature. The liquid included a mix of elements: zirconium, titanium, nickel, copper, beryllium.

Instead of having to quickly cool a liquid metal to become solid, it cooled and hardened itself at room temperature to avoid crystallization and become a glass. They named this liquid metal "Vitreloy." This metal showed massive strength: a one inch wide bar could lift 300,000 pounds, compared to a titanium bar of the same size that could only lift 175,000 pounds. Although this material had super strength, it lacked the attributes that make metals tough. Vitreloy, was more robust than window pane glass, but still cracked.

Image to right: Liquidmetal is the only material that can fully exploit the energy that is released during a turn-without any losses whatsoever. At the same time, the special molecular structure guarantees fastest response and markedly improved ski rebound for optimum turn initiation. Skis made of materials with conventional molecular structure lose too much power during turns as a result of heat and strong ski deformation. Credit: Liquidmetal Technologies

The successful method used to toughen Vitreloy and create Liquidmetal is the same method used to process plastics. In 2000, Johnson and graduate student Paul Kim improved Vitreloy's toughness while giving it the flexibility to allow it to be made into many different shapes. Now, the new line of Liquidmetal alloys is on the rise.

It has been proven that Liquidmetal can handle lots of stress without losing its shape and is three times more elastic than other alloys. To test these characteristics, an experiment was set up. In the experiment, three marble-sized balls made of steel were dropped from the same height into their own glass tubes. Each tube had a different type of metal plate at the bottom: steel, titanium, Liquidmetal. Once each ball was dropped they were left to bounce. The balls hitting the steel and titanium plates bounced for 20 to 25 seconds. The ball hitting the Liquidmetal plate bounced for 1 minute and 21 seconds. During the experiment, this was the only ball that bounced outside its tube.

Liquidmetal Technologies Inc. has an exclusive license for this product and is finding more uses for it. Plates for golf equipment were one of the early products in 1996. Now it is being considered by the U.S. Department of Defense as an armor and anti-armor material.

HEAD Racquet Sports showed its interest in the material in 2003 and used it for a new tennis racquet line that ultimately became the world’s top-selling new technology racquet that same year. Now the Liquidmetal alloy is finding its way into any number of consumer goods, including, cell phone cases and parts, a Rawlings baseball bat, HEAD skis and more. The technology is also being considered for several upcoming aerospace applications.