A Second Set of Eyes
Paul Mogan once struggled with tasks people with sight often take for granted.

Visually impaired since the age of 19, Mogan couldn't read the engineering reference books he needed for his job; they were too heavy to hold up close to his face. And filling out paper forms wasn't easy, because once his magnifying glass was close enough to the paper for him to read it, there usually wasn't room for the pen.

But that was life before JORDY™. 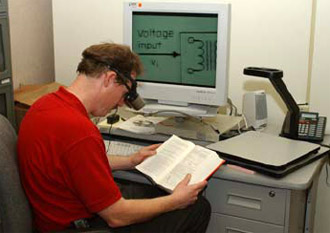 In 1999, Mogan became one of the first to use the device, also known as the Joint Optical Reflective Display, which is based on NASA technology. Normally, his vision is only about five percent of the average person's sight. When he first tried JORDY, he immediately noticed the difference.

"I was in the office of a low-vision specialist, and I was pretty thrilled to be able to read the 20/20 line on the eye chart," Mogan recalls.

JORDY's name was inspired by Geordi La Forge, a character on the television series Star Trek: The Next Generation. Geordi, who was blind, used special glasses that enabled him to see.

The technology improves on the Low Vision Enhancement System (LVES), a video headset developed through a joint research project between NASA's Stennis Space Center in Mississippi, Johns Hopkins University in Baltimore, and the U.S. Department of Veterans Affairs. Worn like a pair of goggles, the LVES (pronounced "Elvis") contained two eye-level cameras, one with an unmagnified wide-angle view and one with magnification capability. This system manipulated the camera images to compensate for a person's low vision limitations.

The LVES was only commercially available for a short time. But its potential inspired Enhanced Vision Systems of Huntington Beach, Calif., to pursue developing JORDY in an effort to bring a new and improved low-vision headset to the market.

A person with low vision retains a small part of his or her useful sight. With this device, people can see objects at any range, from close to distant. It also provides the flexibility for the user to enjoy theatre, sporting events and more. 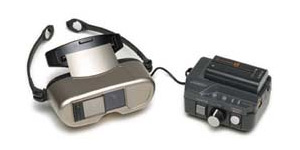 Worn like a pair of glasses, JORDY magnifies objects up to 30x; when placed in its docking stand, it magnifies up to 50x. The user can also adjust the contrast, brightness, and display modes, depending on what works best for their condition.

Image to right: The JORDY™ headset, when worn like a pair of glasses, enables people with low vision to see at any range. Image credit: NASA/KSC

Mogan, a NASA engineer at Kennedy Space Center in Florida, has benefited so greatly from this technology that he now contributes to the device's continued improvement.

After he began using JORDY 1, he contacted the company with some suggestions, including adding image stabilization. This relationship continued as later versions of the device were released.

"I have personally made trips to see the lead designer at Enhanced Vision Systems on several occasions and am part of their Beta test group," he explains. 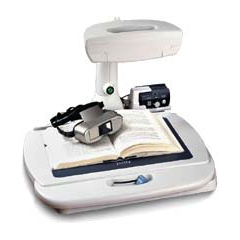 Another enhancement incorporated an even smaller, high-resolution camera that fits into discreet, lightweight glasses. Increased miniaturization means people can wear the device more comfortably for longer periods of time.

Image to left: By placing JORDY™ on a docking stand above a book, a person with low vision can read magnified pages that are projected onto a computer screen. Image credit: NASA/KSC

In addition to helping at work, JORDY also allows users to watch television, participate in events and see the faces of family and friends. In fact, when U.S. speed skater Casey FitzRandolph won a gold medal in the 2002 Winter Olympic Games, his grandfather was able to watch the historic moment from the stands using his JORDY.

An estimated 37 million people in the world are blind, according to the International Agency for the Prevention of Blindness. For people with low vision, technology like JORDY can help them reclaim one of their most important senses.