NASA Spinoffs Extend Life on Earth
Throughout the ages, exploration has led to technological developments that ultimately found their way into the lives of ordinary citizens. The spring-wound clock, for instance, developed in the 18th century for use on ships to help determine longitude, eventually led to wristwatches.

In similar tradition, NASA's exploration of space has led to developments that now benefit the public, from medical and safety improvements to recreational equipment. Below are just a few of the hundreds of technology spinoffs now part of our everyday living. 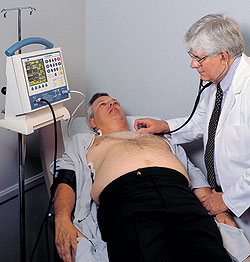 Medical
The monitoring systems used in intensive care units and heart rehabilitation wards were developed from the systems used to monitor astronauts during the first space missions in the early 1960s. Countless Americans recovering from heart attacks and other serious illnesses or injuries owe their lives to this technology, a direct result of NASA's space program.

Image right: Development of an astronaut monitoring system in the early days of the space program led to the design of a computerized medical electronic system used by hospitals and doctors today. Image credit: NASA/Spinoff

Improved breast biopsies were developed as a result of technology for the Hubble Space Telescope program. Biopsies now can be performed with a needle instead of a scalpel. The needle biopsies benefit patients by leaving only a small mark rather than a large scar and by costing significantly less -- an average of one-fourth the cost of the more traditional biopsy. 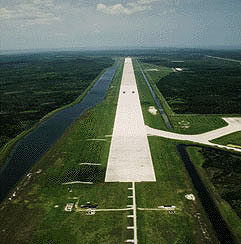 Getting the Groove on Airport and Highway Safety
Research at NASA to tackle hydroplaning problems for aircraft and land vehicles began in the 1960s. The unique landing requirements of the space shuttle were also a basis for continued studies.

NASA researchers determined that cutting thin grooves across concrete runways reduces the risk of hydroplaning. The grooves, which create channels for excess water to drain, have been shown to improve aircraft tire friction performance in wet conditions by 200 to 300 percent.

Today the Shuttle Landing Facility runway at NASA Kennedy Space Center is equipped with safety grooving in the middle to optimize wet friction performance, and grinding in touchdown areas to minimize tire-spin wear. Hundreds of commercial airports around the world have had their runways grooved.

This technique is now also used nationwide on highway curves and overpasses; pedestrian walkways, ramps and steps; and food processing plants and cattle holding pens. The use of grooves on highways has contributed to an 85 percent reduction in highway accidents. This could be NASA's most successful technology in terms of lives saved and injuries and accidents avoided. 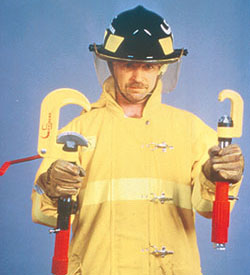 Lifeshears
This powerful handheld rescue tool can quickly cut through cars or other enclosures to free people involved in an accident or other dangerous situation. The tool, which was developed through the joint efforts of the Hi-Shear Technology Corporation, firefighters and NASA, uses the same power source used to separate solid rocket boosters from space shuttles.

Image right: The cutter is pyrotechnically actuated, using a miniature version of the power cartridges used for separation devices on the space shuttle. Image credit: NASA/Spinoff

Lifeshears were used by rescue workers searching for survivors at the Oklahoma City federal building bombing site in 1995 and the World Trade Center in 2001. Lifeshears are lighter, cheaper and easier to use than traditional rescue equipment.

Recreation
The SpiraFlex® system, presently aboard the International Space Station, is used by the crewmembers as a primary countermeasure against musculoskeletal degradation caused by microgravity. 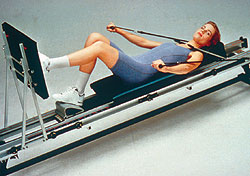 A cardiovascular conditioner developed for astronauts in space led to the development of a physical therapy and athletic development machine used by football teams, sports clinics and medical rehabilitation centers.

Courtesy of NASA Innovative Partnerships Program and the Spinoff Office