Keeping the Beat: NASA Collaborates on Heart Monitor for Astronauts
On the Space Shuttle, astronauts can see splashes of Earth's ocean blue, desert red and forest green all in a single glance out the window -- a view to make anyone's heart skip a beat. There is, in fact, evidence that astronauts experience slight variations in heart rhythms. But despite the breathtaking views, the likely cause is weightlessness.

As NASA prepares to send humans farther into space, researchers want to know how these changes could affect an astronaut's health. To find out, a team from NASA’s Glenn Research Center and the MetroHealth Medical Center in Cleveland, Ohio, has developed a method for doctors to monitor astronauts’ hearts in space. This technology may also improve care for thousands of patients on Earth every year. 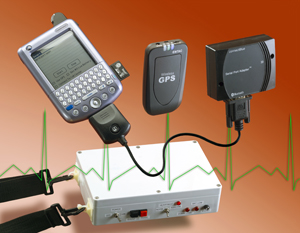 Image left: Researchers will test this prototype of the heart monitoring system for ambulatory patients with arrhythmia symptoms.

Variations in the heart's rhythm are called cardiac arrhythmias. If untreated, they can lead to chest pains, fainting or even sudden cardiac death. This type of heart attack is the most common cause of death in the United States.

"There is clearly evidence that astronauts have experienced arrhythmias as part of space flight," said David Rosenbaum, M.D., director of MetroHealth’s Heart and Vascular Center. "So we wanted to use this technology to determine how microgravity and weightlessness affect the heart over long periods of time."

The heart monitoring system will use an advanced electrocardiograph (EKG) pioneered at MetroHealth to amplify astronauts' heart patterns and detect slight changes in rhythm during exercise stress tests. These subtle variations appear in 70 to 80 percent of patients at risk for cardiac arrhythmias.

Flight surgeons will be able to monitor the astronauts' heart rates from the ground using NASA's award-winning Embedded Web Technology. This miniature server records the EKG and sends the information over the Internet, allowing the surgeons to view the heart data in real time on a standard Web browser.

Last summer, researchers tested the system on 15 people to make sure that it will work in the space environment.

"In low gravity, your heart actually floats inside your chest cavity," said Michael Mackin, NASA's chief engineer for the project. "So, we wanted to make sure that the EKG readings in space would be consistent with those on the ground."

A team of Glenn and MetroHealth researchers conducted tests on the ground and on NASA's K-135 low-gravity flight research aircraft. The plane flew up and down in about 45 hill-shaped maneuvers called parabolas. At the peak of each parabola, the test subjects experienced about 20 seconds of very low gravity similar to the weightlessness experienced on an orbiting spacecraft.

"We're still evaluating the test results," Mackin said, "but it appears that the system works in low gravity and the readings from the flight are consistent with the ones we took on the ground." 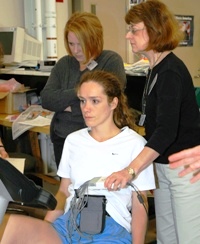 Mackin hopes to use the new system on the International Space Station to determine if long-term spaceflight affects the heart. This information is vital before NASA sends astronauts on trips to Mars and beyond that could last months, if not years.

In June, the team will conduct clinical tests on the ground version of the system. This version includes a global positioning system to track the patient's location. It will allow medical professionals to monitor outpatients with symptoms of arrhythmia in real time -- something they have never been able to do. In an emergency, the hospital will know where to find the patient.

"Doctors will be able to check on their patients using any cell phone, handheld digital device, laptop or desktop computer with a Web browser," Mackin said. "And patients with arrhythmia symptoms will be able to leave the hospital and go on with their days safely."

According to Mackin, NASA's Embedded Web Technology could help medical professionals monitor patients with diabetes, wounds, pulmonary problems and other conditions. It also has practical applications in everyday appliances.

"This technology can be used to control or monitor any device that contains a computer, software, input sensors and output actuators," Mackin said. "In other words, you could use it with a car, DVD player, fax machine or kitchen appliances."

Clearly, the heart monitoring system is a marriage of two technologies with immeasurable potential. NASA's Embedded Web Technology and MetroHealth's advanced EKG could save countless lives on Earth and answer fundamental questions about human survival in space.