As Clear as a Bell
From hand gestures and grunts to faxes and the Internet, the way we stay in touch with each other has drastically changed since the dawn of humankind.

In recent decades, NASA has been among the forerunners in advancing communication. Take, for instance, the way millions of people on Earth heard Neil Armstrong's famous words during his first step on the moon in July of 1969. The method he used sparked a product that is a mainstay in our lives at work and at home today. 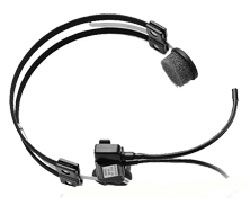 An idea as simple as the modern headset started as a need for a better product for space, commercial and military use.

Pilots were accustomed to using headsets that were bulky and uncomfortable, but they wanted a better alternative.

Image right: A recent model of the Plantronics MS50 commercial aviation headset has been used by pilots for over 40 years. Image credit: Plantronics, Inc.

In 1961, United Airlines invited anyone who was interested to come up with an improved design. Courtney Graham, a pilot for the company, agreed there had to be a better way.

Graham teamed up with his friend Keith Larkin, who had been working for Plane-Aids, a small company in California, to develop a lightweight headset for commercial use.

They came up with a design for a headset with a headband component that used an acoustic tube connected to tiny transducers, commonly used in hearing aids, for both a microphone and receiver.

The new design, called the MS-50 headset, was accepted by United Airlines. Graham and Larkin took advantage of this opportunity to open their own company, Pacific Plantronics Inc.

By 1962, United Airlines was supplying their pilots with the MS-50 headset. With approval by the Federal Aviation Administration, a modified version was also developed for air-traffic controllers. 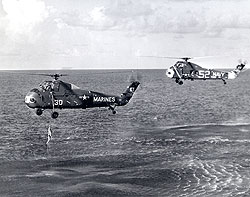 Graham and Larkin did their homework and discovered airline pilots weren't the only ones wrestling with the cumbersome headset issue – astronauts, call centers and phone operators needed a better product, as well.

Image left: A U.S. Marine helicopter plucked Astronaut Virgil Grissom from the ocean after the splash down. Unfortunately the capsule was lost at sea. Image credit: NASA

At that time, NASA was also looking for a lightweight, self-contained communication product. After the Liberty Bell 7 capsule splashed down in 1961, the hatch prematurely blew out and the cabin flooded, losing all radio transmission and preventing astronaut Gus Grissom from contacting his recovery team.

Because it was vital that a reliable device be developed in case of emergencies like this one, NASA contacted ITT Labs in Fort Wayne, Ind. ITT Labs designed a self-contained radio transceiver called a Kellorad unit, which included the MS-50 headset.

Pacific Plantronics began working on a way to implant the company's MS-50 headset into an astronaut's helmet after astronaut Wally Schirra saw the headset as part of the Kellorad unit. Graham's company created a Space Environmental Communications division to work on the new idea. It took only 11 days for the team and NASA to have a working microphone design, in addition to a new noise-canceling feature. Subsequent improvements were made and the unit was used throughout the Gemini, Apollo and Skylab missions. 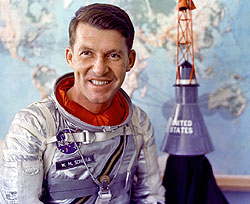 By participating with the space program, Pacific Plantronics -- now called Plantronics Inc. -- gained recognition. The company credits its ongoing success to the collaboration with NASA and the agency's use of the jointly developed technology.

Plantronics went on to develop new products for use at home and in the office, such as Bluetooth headsets that make wireless connections for mobile phones, laptops and personal digital assistants.

And all of this came about from a basic need to talk to one another clearly from places as far away as the moon. Perhaps similar technology one day will enable astronauts to communicate from Mars and beyond.

Courtesy of NASA Innovative Partnerships Program and the Spinoff Office