A NASA-supported scientist is learning how to use carbon dioxide--the main gas in Mars' atmosphere--to harvest rocket fuel and water from the red planet. 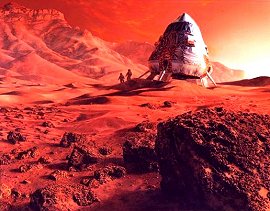 When astronauts first go to Mars, it'll be difficult for them to bring everything they need to survive. Even the first tentative explorations could last as long as two years--but spaceships can only carry a limited amount.

"We might have to do what explorers have done for ages: live off the land," says chemical engineer Ken Debelak of Vanderbilt University.

Explorers on Earth could usually count on finding what they needed. The animals might be strange, but they'd be there, and they'd be edible. Mars is barren. But the challenge is the same. Astronauts will want to pull what they need from the planet itself. And although that goal seems improbable, Debelak believes it can be achieved. He's working on a NASA project to make it happen. The key, he says, lies in the Martian atmosphere.

It's a meager atmosphere, compared to Earth's, and it's about 95 percent carbon dioxide (CO2). But that turns out to be an advantage. The carbon dioxide, says Debelak, can be used to harvest almost everything else.

Inside martian rocks and soil lies a bounty of useful elements: magnesium and hydrogen for rocket fuel, oxygen to breathe, water to drink. What's needed is a solvent to get them out, and that's where the carbon dioxide comes in handy.

"When CO2 is compressed to a pressure of 73 atm and heated to 31.1 degrees Celsius, it becomes a supercritical fluid--and a marvelous solvent," says Debelak.

Supercritical carbon dioxide behaves much the same. CO2 molecules flow into solid matter, surrounding atoms, pulling them apart and away.

Left: A phase diagram. The critical point, denoted by the big gray dot, is a special combination of temperature (Tc=31 C) and pressure (Pc=73 atm) where CO2 has properties of both liquid and gas. Above the critical point, it becomes a supercritical fluid. [more]

On Earth, supercritical CO2 is not used much to dissolve things because there are less expensive, more effective solvents close at hand. It is, however, used to remove the caffeine from coffee beans, and sometimes to dry-clean clothes. On Mars, Debelak believes, supercritical CO2 will play a much more important role.

For example: Magnesium can be dissolved quite easily by supercritical CO2, Debelak has found. "That's an experiment that we're quite excited about at the moment," he says. Magnesium, which is likely to be found in martian soil, ignites easily and can be used to fuel rockets. In fact, says Debelak, one Mars exploration scenario called for a lander to be made of magnesium--"the legs and so on." When the astronauts were ready to go home, "you could chop it up, pack it into a rocket engine, and then add some other oxidizer to fire it off." Using CO2 as a solvent, magnesium could instead be harvested directly from Mars.

Above: A chamber containing two phases of carbon dioxide--liquid and gas. As temperature and pressure increase (from left to right), the two phases merge to become a supercritical fluid. [more]

Supercritical CO2 might also be used to generate water. Certain martian rocks (like some of Earth's rocks) contain hydrogen. When these rocks are submerged in supercritical carbon dioxide, a chemical reaction takes place. The CO2's carbon becomes "fixed" in the rock, leaving the oxygen free to find another partner: hydrogen. "The process kicks out water," marvels Debelak. "You can actually use it to form water."

Pulling water from rocks will probably have the biggest payoff, at least in the short term, says Debelak. In addition to drinking, "you can split water into hydrogen for fuel, and oxygen for breathing--or as an oxidizer for some sort of engine." Eventually, colonists could set up plants that use CO2 from the martian atmosphere to process hundreds of kilograms of raw material a day.

A supercritical fluid has some advantages over other solvents: Its solubility changes dramatically when you alter the temperature or the pressure. You can control it, so that sometimes it's a solvent for a particular substance, and sometimes it's not. That makes it easy to recover the material that has been dissolved. Let's say you have caffeine dissolved in supercritical carbon dioxide. To recover the caffeine (caffeine recovered from coffee beans is often put in soft drinks), you just lower the pressure of the CO2 and the caffeine drops out.

Currently, Debelak is trying to pin down the way a variety of substances behave in supercritical CO2. He's looking at which minerals are easily soluble and which are not. And if they're not, he's trying to determine how their solubility can be improved. Adding other substances to the CO2 sometimes helps, he says.

Debelak's work could be useful on Earth, too. Carbon dioxide is often spotlighted because of its damaging role in global warming. But as a solvent, it's benign. Many solvents common in industry are toxic. They cause cancer, and if they get into the water system, they stay for a long time. So there's interest, says Debelak, in learning how to use CO2 as a 'green' alternative.

Carbon dioxide plays widely different roles on Earth and on Mars. "That's what's intriguing," points out Debelak. "Mars is a totally foreign environment to us. The rules are different."

"So that's what we're doing--trying to figure out the rules," he says. "And then we can figure out how to play the game ... on both planets."