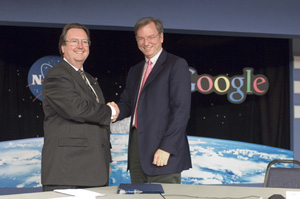 Image to Left: The Director of NASA Ames Research Center, Scott Hubbard, with Google's Chairman of the Executive Committee and Chief Executive Officer, Eric Schmidt after signing the memorandum of understanding.

NASA and Google signed a memorandum of understanding that outlines plans for cooperation on a variety of areas, including large-scale data management, massively distributed computing, bio-info-nano convergence, and encouragement of the entrepreneurial space industry.

"Our planned partnership presents an enormous range of potential benefits to the space program," said NASA Ames Center Director G. Scott Hubbard. "Just a few examples are new sensors and materials from collaborations on bio-info-nano convergence, improved analysis of engineering problems as well as Earth, life and space science discoveries from supercomputing and data mining, and bringing entrepreneurs into the space program. While our joint efforts will benefit both organizations, the real winner will be the American public," he added.

Bio-info-nano convergence is the technology realm that capitalizes on nature's own solutions to complex problems, directed by advanced information technologies, and all accomplished on an ultra-small scale. Current applications include advanced materials and extremely small sensors and science instruments. Bio-info-nano convergence has the potential to create everything from ingestible, medical diagnostic capsules which would explore our bodies to highly capable micro-sized spacecraft able to explore other worlds. 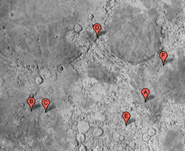 "Google and NASA share a common desire—to bring a universe of information to people around the world," said Eric Schmidt, Google chief executive officer. "Imagine having a wide selection of images from the Apollo space mission at your fingertips whenever you want it. That’s just one small example of how this collaboration could help broaden technology’s role in making the world a better place.”

Image to Right: Google's Moon Web site combines images and information from NASA with the power of Google technology. The new collaboration could improve the public's access to NASA's vast information resources. (Screen Capture from http://moon.google.com/)

"I'm thrilled that NASA Ames Research Center and Google, two of our region's and our nation's most valuable and innovative organizations, have formed a partnership," said Rep. Anna G. Eshoo (CA -14th District).

"As Silicon Valley continues to lead in developing technologies that will guide our nation's economy in the 21st century, partnerships combining the best in public sector innovation with the cutting edge of private industry will serve as the gold standard in public-private partnerships for years to come. The technologies created by the partnership of Google and NASA Ames not only will enable and enhance further exploration of space, it will positively impact the daily lives of all Americans for generations to come," Eshoo said.

As part of the agreement, Google is planning on building a research and development campus at the NASA Research Park at NASA Ames. The campus, which is less than five minutes from Google's corporate headquarters in Mountain View, Calif., will be comprised of up to 1 million square feet designed to suit Google and NASA's research goals.

Google's innovative search technologies connect millions of people around the world with information every day. Founded in 1998 by Stanford doctoral students Larry Page and Sergey Brin, Google today is a top Web property in all major global markets. Google's targeted advertising program provides businesses of all sizes with measurable results, while enhancing the overall Web experience for users.

To view more images from the event, please visit: