NASA 'Shoots' for Crime Investigators With New Technology
NASA engineers and detectives now have something in common -- a new NASA-developed camera accessory that uses a laser to "shoot" photos that can precisely measure damage on the Space Shuttle as well as details of crime scenes.

Engineers at NASA's Kennedy Space Center (KSC), Kennedy Space Center, Fla., developed a camera attachment that uses laser technology. The Laser Scaling and Measurement Device for Photographic Images was created to assist scientists in determining the exact scale of any damages to the Space Shuttle’s external tank when viewing photographs of the spacecraft on its launch pad. 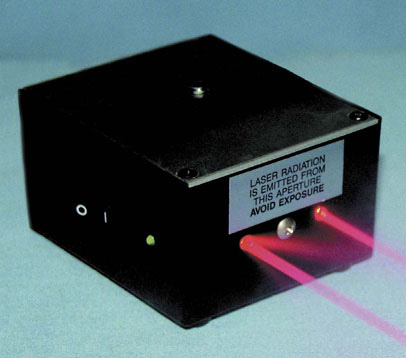 Image right: The Laser Scaling Device attaches directly to a camera and projects a pattern of dots into the field of view. This pattern appears in the photograph along with the image of the object under investigation, enabling the viewer to measure the size of the object. Credit: NASA

The device is a half-pound black box, powered by a single battery that attaches directly to a camera’s tripod. Twin lasers, an inch apart, shoot from the box when a photo is taken. The lasers’ reference points provide the ability for someone to look at these special photographs and have a better understanding of just how big or small objects really are.

Typically, when you use a camera to zoom in on an object, you cannot tell what size an object is, unless it is next to something familiar. However, when a picture is taken with this new NASA instrument, the image is loaded into Microsoft Word-compatible software on a computer and items are then viewable and measurable on the computer screen. The software was designed by NASA electrical design engineer Kim Ballard.

When the user sees the image on a screen, they can pick reference points, such as a laser pattern of reference point dots, that will appear along with the image of the target object. The user also adds in the distance between the reference points. The software then sets the "scale" based on that distance. This allows the viewer an understanding of the size of the object. 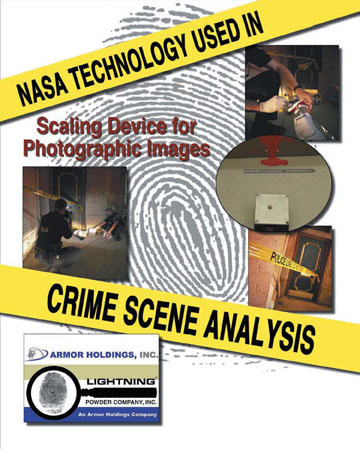 Image left: By having the ability to measure the size of an object in a photograph, the Scaling Device helps crime scene investigators analyze information. Credit: NASA

“I think that the greatest contribution that the device’s software offers to law enforcement is it ‘un-cuffs’ the investigators hands with digital image evidence by providing fast and accurate measurements of anything in a crime scene photo, not just the intended target,” said Ballard. It can detect evidence that may not have been obvious at the crime scene. By using the software to look at the photograph, investigators can determine how big or small objects in a room actually are, and their locations.

Jeffrey Kohler of Anchorage, Alaska-based Arctic Slope Regional Corporation Aerospace, a company that supports NASA's Innovative Partnership Office, and his colleagues did an assessment to review the technology and how it could apply to potential commercial markets. “Forensics was at the top of the list,” said Kohler.

Detectives use the technology to fully view photos of pieces from crime scenes such as blood-spatter patterns and graffiti. They can also see the images from different angles (including diagonally, horizontally and vertically) to better analyze and understand the scenes. Law enforcement agencies have already begun to order the device.

In fact, just recently, Ballard was asked by the U.S. Federal Bureau of Investigations (FBI) to add more capabilities to the accessory’s software to allow forensics experts to zoom in and out of images to measure blood spatter details across a wall as well as specific areas. At the FBI’s request, NASA also created the images in different formats for various computers.

Armor Holdings, Inc. of Jacksonville, Fla., is a leading manufacturer of crime scene investigation accessories, including the new laser technology. Through Armor, this new instrument is not only benefiting crime scene investigations, but also photographers and surveillance personnel, and is becoming increasingly popular in crime laboratories around the world.