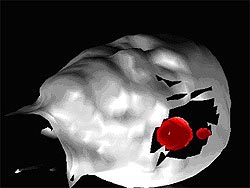 Some maps can guide you home. Others point to buried treasure. Researchers hope one in particular could help prolong our lives.

This map precisely pinpoints brain tumors and is part of a current research study jointly conducted by NASA's Jet Propulsion Laboratory in Pasadena, California and Keck School of Medicine at the University of Southern California.

Image to right: A map of tumors inside the brain created using the JPL's infrared camera and software originally developed for exploring martian terrain. Credit: NASA

Using an infrared camera and software NASA developed to analyze rocks on Mars, doctors at Keck are testing the duo to see how accurately they can detect and outline brain tumors.

At the moment, neurosurgeons use microscopes to find the boundaries of tumors and remove them. As good as the technique is, it can be hard to tell healthy tissue from tumor cells.

"Brain tumor tissue looks the same as healthy tissue on the edges," said Dr. Babak Kateb, lead scientist for the project. That means there's still a chance of cutting out healthy brain tissue or leaving cancerous cells behind.

However, if the new system proves to be as good as researchers hope it is, doctors could have a powerful tool for navigating the brain's delicate terrain.

The secret to the new technology is the infrared camera's ability to see slight differences in heat. "The camera's precision allows it to map temperature differences of one-hundredth of a degree," said Dr. Sarath Gunapala, JPL lead engineer for the camera. 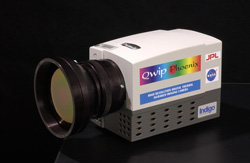 Tumor cells emit more heat than healthy brain cells. With the infrared camera's extraordinary ability to detect small temperature changes, it may be able to distinguish healthy cells from tumor cells. The computer software would then process the images to create a map of the brain that precisely plots the tumor locations.

Image to left: JPL's new ultra-sensitive infrared camera can sense extremely slight differences in temperatures. Researchers suspect the camera may be able to do the same in brain cells. Credit: NASA

Using this map as a guide, researchers believe surgeons could see exactly where to make their incisions and have better success in cleanly removing the entire tumor without damaging the patient's healthy brain tissue.

If the software-camera mapping combination is successful, the incredible tool will not only be a giant leap for brain neurosurgery, but it may help patients survive longer and live better.
Charlie Plain
NASA's John F. Kennedy Space Center
› Back To Top