NASA Technology Helps Detect and Treat Heart Disease and Strokes
PASADENA, Calif. -- NASA space technology is helping doctors diagnose and monitor treatments for hardening of the arteries in its early stages, before it causes heart attacks and strokes.

Hospitals and doctors around the country are using ArterioVision software initially developed at NASA's Jet Propulsion Laboratory, Pasadena, Calif., along with a standardized, painless, non-invasive ultrasound examination of the carotid artery, which carries blood from the heart to the brain. 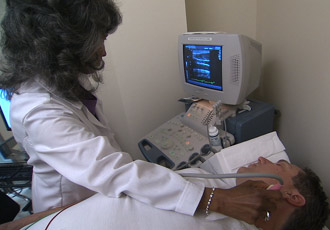 A standard carotid ultrasound measures plaque and blood flow within the artery. When an ultrasound is used with the software, the test measures the thickness of the inner two layers of the carotid artery - the intima and media. Medical Technologies International, Inc. (MTI) of Palm Desert, Calif., patented the ArterioVision software.

Arterial thickening provides the earliest evidence of atherosclerosis, or hardening of the arteries, the beginning stage of a disease process that leads to heart disease and stroke. Doctors can use this carotid intima media thickness (CIMT) measurement to calculate the age of the patient's arteries, which does not always match the patient's calendar age.

"You may look and feel one way on the outside, but your arteries actually could be much older than one realizes," said Dr. Howard N. Hodis of the Keck School of Medicine at the University of Southern California, Los Angeles. "Once patients see how thick their arteries are, there is much more incentive for them to change their lifestyle with dietary modification and exercise," he said. "Physicians also can use the test to monitor and change current medications."

The U.S. Food and Drug Administration has approved the new diagnostic tool, called the ArterioVision CIMT procedure. Robert Selzer, MTI chief engineer, worked in JPL's Image Processing Laboratory for 15 years, where the technology was developed that ultimately led to the software used in ArterioVision.

"This is such a precise method of examining the carotid artery. It can distinguish between 256 shades of gray at a subpixel level," Selzer said. "You need that kind of detail to help catch heart disease as early as you can, often before there are any outward symptoms."

During the test, a patient lies on an examination table while a technician applies gel to the neck to image the carotid arteries, located on both sides of the neck near the skin's surface. The technician uses an ultrasound machine while following a patented protocol to capture specific images of the carotid artery wall. Using the ArterioVision software, the physician generates a CIMT measurement and a report that identifies the patient's risk profile when compared to people of the same gender and age. 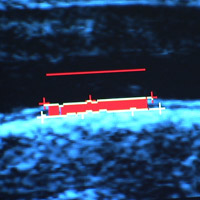 JPL's Image Processing Laboratory was created in 1966 to receive and make sense of spacecraft imagery. In the lab, the NASA-invented Video Imaging Communication and Retrieval software has been used to process pictures from numerous space missions, including the Voyagers and Mars Reconnaissance Orbiter. Periodic upgrades of the imaging software have enabled greater accuracy and improved knowledge of our solar system, and have laid the groundwork for understanding images of all kinds.

The ArterioVision test was developed with JPL's Innovative Partnerships Program, designed to bring benefits of the space program to the public. "It is exciting to see this NASA-funded technology grow in sophistication over the years and help in the battle against one of the nation's leading health issues," said Ken Wolfenbarger, Innovative Partnerships Program manager at JPL. The American Heart Association says heart disease is the leading cause of death in the United States, while strokes are third, behind all forms of cancer.

Gary F. Thompson, chairman and chief executive officer of MTI, says the test is near and dear to his heart - literally and figuratively. "I was the first male in my family to reach 50, so I decided to celebrate by running the Los Angeles marathon, but I had a heart attack halfway through it and couldn't finish," Thompson said. "None of the non-invasive tests that I had prior to the marathon detected my silent heart disease, and I knew there had to be something better out there."

The California Institute of Technology, Pasadena, which manages JPL for NASA, licensed the ArterioVision device to MTI. For more information about ArterioVision, visit: