Progressive Plant Growing is a Blooming Business
Soil. Water. Say that plants don't need them and people may think you've traded your cow -- and your good sense -- for a handful of beans. But NASA-sponsored plant experiments prove that you don't need soil and lots of water to grow a beanstalk that would make Jack proud. 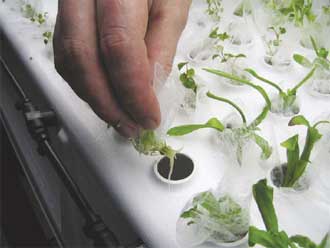 Plants have been to space since 1960, but NASA's plant growth experiments began in earnest during the 1990s. Experiments aboard the space shuttle and International Space Station have exposed plants to the effects of microgravity. These experiments use the principles of aeroponics: growing plants in an air/mist environment with no soil and very little water.

In 1997, NASA-sponsored studies aboard the Mir space station studied adzuki bean seeds and seedlings, a high-protein Asian food crop. While the beans were growing in zero gravity, ground control experiments watched to see how another group of seeds and seedlings responded on Earth. Both sets of plants were treated with an all-natural, organically-derived, disease control liquid known as Organic Disease Control, or Organically Derived Colloidals (ODC).

While all of the seeds did well, those aboard Mir grew more than those on Earth. Both sets of plants treated with the ODC method grew more robustly and exhibited less fungal infection than the untreated seeds and seedlings.

Results from NASA's research aboard Mir has contributed to rapid-growth systems now used on Earth. Plants are started from either cuttings or seeds, then suspended mid-air in a growing chamber. The developing root systems grow in an enclosed, air-based environment that is regularly misted with a fine, nutrient-rich spray. 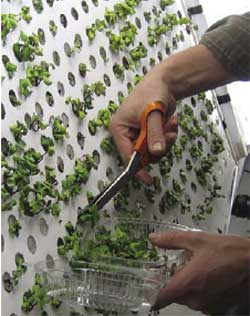 Aeroponic growing systems provide clean, efficient, and rapid food production. Crops can be planted and harvested in the system year round without interruption, and without contamination from soil, pesticides, and residue. Since the growing environment is clean and sterile, it greatly reduces the chances of spreading plant disease and infection commonly found in soil and other growing media.

Image at right: A grower clips the leaves of plants grown in the openings of an aeroponic growing chamber. (Image credit: AgriHouse, Inc.)

The suspended system also has other advantages. Seedlings don't stretch or wilt while their roots are forming. Once the roots are developed, the plants can be easily moved into any type of growing media without the risk of transplant shock, which often sets back normal growth.

Aeroponics systems can reduce water usage by 98 percent, fertilizer usage by 60 percent, and pesticide usage by 100 percent, all while maximizing crop yields. Plants grown in the aeroponic systems have also been shown to uptake more minerals and vitamins, making the plants healthier and potentially more nutritious.

As an example, let's talk tomatoes. Tomato growers traditionally start their plants in pots, waiting at least 28 days before transplanting them into the ground. Using an aeroponic system, growers can start the plants in the growing chamber, then transplant them just 10 days later. This advanced technology produces six tomato crop cycles per year, instead of the traditional one to two crop cycles.

That's good news for those who love marinara sauce.

Successful long-term missions into deep space will require that crews grow some of their own food during flight. Aeroponic crops are also a potential source of fresh oxygen and clean drinking water. But this is about more than a breath of fresh air or taking a quick shower. Each ounce of food and water produced aboard a spacecraft reduces payload weight, allowing space for other cargo that can't be produced onboard.

With technology like this, jumping over the moon won't be reserved for fairy tales.