NASA Working on Early Version of 'Star-Trek'-like Main Ship Computer
All that is known about future spaceships will be in their main computers, according to NASA scientists. They busily are creating a set of computer 'tools' that possibly will evolve into a main computer system much like that of the fictional starship Enterprise of television's 'Star Trek' series. 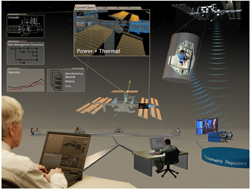 A first version of the new tools -- collectively called the 'virtual iron bird' (VIB) -- could be ready by June 2006. An 'iron bird' is an engineering term for a physical model of an aircraft that designers use to verify an airplane's systems. In contrast, the VIB tools create a computerized 'iron bird' model that engineers can use equally well to analyze past events or test spacecraft before they are even built. Initially, these tools may well aid NASA with the Space Shuttle fleet and the International Space Station.

"Imagine an engineer or an astronaut who types a question into a computer about a particular spacecraft part," said David Maluf, a scientist at NASA Ames Research Center, located in California's Silicon Valley. "Not only will the 3-D image appear, but the system will respond with a computer-aided design (CAD) drawing of the part and the procedures of how to handle the part. All the problems reported or associated with that part also will be displayed." 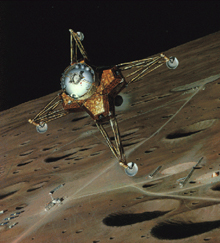 One option is to show the whole spacecraft and where the part is, as well as what impact the piece has on the vehicle, according to Maluf. Prior to the VIB system, engineers had to gather information manually from several sources with multiple computer systems.

"In sum, the VIB is ideal for assisting engineers in the design of major new spacecraft intended to carry human beings," said Mark Shirley, a NASA Ames computer scientist. "The VIB is an early version of a 'Star Trek'-like main ship computer. The virtual iron bird - sometimes called 'Mission on a Disk' - will include the total knowledge of everything about a spacecraft and will be carried on that spacecraft," Shirley added.

"The novel part of the NASA virtual iron bird system is that it can put 3-D images and other relevant information, such as engineering drawings, specifications, part numbers and many more details, all on one page," Maluf explained.

"One part of the system can scan in three dimensions to create 3-D computer models of spacecraft parts," Maluf said. The commercially available scanner is about the size of a laptop computer. The 3-D scanner includes several lenses that use a laser to scan objects in 3-D within a defined space. The resulting 3-D images are married with related material that engineers can use to solve problems. 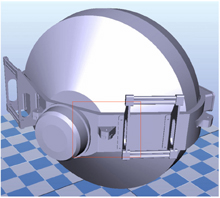 "Another part of VIB can diagnose the health of the space vehicle - like aging electrical wires that might be affected by big swings in temperature that occur in space," Maluf observed. The VIB can access drawings, procedures and a history of the space vehicle in a single report, according to Maluf.

The VIB also can realistically simulate real-time space flight of a vehicle that has not yet been built. Another component can provide computer game-like visualizations of the vehicle. Engineers can use both of these tools for analysis of alternative scenarios, whether during spaceship design or flight.

In the near term, the VIB has obvious spin-off potential for educational and commercial engineering uses, according to Maluf. Using a VIB-like program, students could better understand engineering details of the International Space Station, for example. 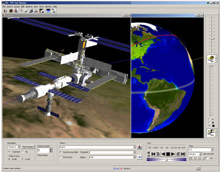 Automotive engineers could use a specialized VIB program to help design fuel-efficient cars of the future that would inform their drivers of potential problems and recommended repairs. Meanwhile, other designers could use VIB software to plan ships, gear-cutting machinery or even buildings, all with the capacity to look out for themselves by suggesting maintenance that could avoid expensive, major repairs and failures.

Finally, for spacecraft engineers, the Virtual Iron Bird may well help fulfill the Vision for Space Exploration, helping them to visualize and design highly reliable spacecraft more quickly than ever before. Moreover, the VIB software tools could provide a vital, extra margin of safety for astronauts riding spaceships on long-duration voyages by diagnosing and providing solutions to problems that space travelers could solve millions of miles from the home planet.