NASA Develops an X-ray Machine for Martian Rocks
As NASA continues to turn the nation's Vision for Space Exploration into reality, a scientist from NASA Ames Research Center, located in California's Silicon Valley, has been selected to help create a planetary rover for Mars Science Laboratory (MSL) mission. 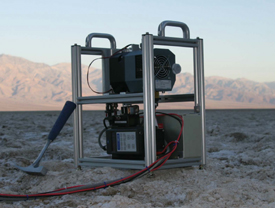 The MSL mission is scheduled for launch in 2009 as part of NASA's Mars Exploration Program. It will deliver a mobile science laboratory to the surface of Mars to explore a local region as a potential habitat for past or present life. After landing, scientists expect the self-powered science rover to remain active for one Mars year, equal to two Earth years.

Image left: Chemin XRD/XRF prototype instrument, during testing in Death Valley, CA in 2004. The prototype instrument, which can be hand-carried to remote locations, weighs about 20 kg. and operates on less than 100 watt-hours of power. The spaceflight instrument, which will look much different than the prototype, will weigh about 5 kg. and will utilize about 15 watt-hours of power. A geologist's hammer is shown for scale. Image courtesy: NASA.

"The Mars Science Laboratory is an extremely capable system, and the selected instruments will bring an analytical laboratory to the Martian surface for the first time since the Viking Landers over 25 years ago," said Douglas McCuistion, Mars Exploration Program director at NASA Headquarters.

One of the eight selected instruments and associated science investigations is an X-ray device for definitive mineralogical analysis developed by David Blake of NASA Ames' Space Science and Astrobiology Division. 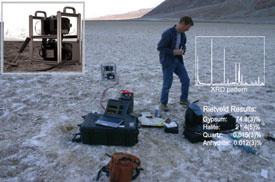 "CheMin is a miniature X-ray diffraction instrument that will determine the mineral structure and elemental composition of rocky materials of the solar system," said Blake. "It will be used to identify and quantify all minerals in complex natural samples of the Martian surface, such as basalts, evaporates and soils."

Image right: Field test of CheMin at Badwaters Flat, Death Valley, CA. In the foreground are the laptop and battery pack that are used to operate the instrument. The inset photo is a closeup of the CheMin instrument. Co-Investigator Dave Vaniman of Los Alamos National Laboratory is standing near the CheMin instrument preparing another sample for analysis. The superimposed pattern and table show mineralogical results from the on-site sample analysis at Badwaters. Image courtesy: NASA.

The search for evidence of past or present life on the red planet will begin with a search for evidence of conditions supportive of life (such as evidence of the activity of water), rather that a search for life itself. The discovery of particular rock types or suites of minerals can help scientists determine past or present water activity. Mineralogical analysis also can provide insights into pressure and temperature conditions, past climate, activity of biologically significant gases, even the presence of chemical sources of energy useful for life, according to Blake.

Blake developed a portable prototype of the X-ray instrument and successfully tested it in May 2004, at a variety of Mars analog sites in California's Death Valley. "We have replaced the original laboratory source with a small-focus X-ray source manufactured by Oxford X-ray Technology Group, which makes the data collection process faster," Blake said. "Now, interpretable patterns of single minerals can be obtained in a few minutes and entire patterns of complex rocks can be obtained in a few hours," he added.

In addition to instruments selected from U.S. researchers, MSL will also carry instruments and sensors provided by the Russian Federal Space Agency and the Spanish Ministry of Education and Science.