NASA Developing Detector to Discover Life on Other Planets
NASA scientists are developing a 'life detector' to enable researchers to look for exotic life forms under a sea that may exist on Europa, a moon of Jupiter.

Scientists hope to assemble a prototype life detection system called the 'Medusa' system by late summer at Oregon State University, Corvallis, Ore. Medusa, an instrument package about the size of a big footlocker, will 'sense' life by analyzing samples from severe environments on Earth similar to conditions on Europa, Mars and other planets in the solar system, according to NASA researchers. Small submarines will be used to carry Medusas to research sites to gather scientific data.

"Our goal is to find Earth life that exists in environments that are similar to conditions that we know exist on other planetary bodies. Identification of such life forms would help to build the case that extraterrestrial life could exist in our solar system," explained Michael Flynn, a scientist at NASA Ames Research Center in California's Silicon Valley. "We are looking below the surface of Earth's oceans near hydrothermal vents because they could be similar to vents scientists theorize may be under an ice-covered ocean on Europa." A hydrothermal vent is a hole in the ocean floor where hot liquids, often containing minerals and gases, rise from subsurface magma.

The study of life in extreme environments on Earth provides important facts that scientists can use in the search for extraterrestrial life. Investigators believe that the ultimate source of energy for all known life forms on Earth comes from the sun. Scientists believe, however, that for life to exist much farther away from the sun than Earth in places with thick ice crusts, such as Europa, life would need other sources of energy.

Sunshine by itself is not enough to support life on Europa, according to Flynn. If scientists can find a terrestrial example of a life form completely decoupled from the sun, the case for life on Europa would be greatly strengthened, observed Flynn.

Some scientists theorize that one environment that might foster life, independent of the sun, is in the deep subsurface of Earth. This underground environment may contain organisms that exist solely on chemical energy that comes from off-gassing magma. Hydrothermal vents may be openings into the subsurface community of life, or 'biosphere,' Flynn said. "The goal of our work is to develop an instrument capable of testing this hypothesis," Flynn explained.

The Medusa system can monitor chemistry and biology in remote, harsh places. This instrument package can collect and store samples. Medusa carries its own on-board power, data storage and processing and communications, as well as sensors to measure temperature and flow.

Medusa also contains a flow-through spectral chemical sensor. This instrument uses 'spectral analysis' to examine light coming from samples. A spectrograph in Medusa sees unique light combinations that come from objects to identify them just as unique fingerprints identify persons. Color combinations also can reveal various chemicals and conditions. A sample injected with a dye will emit a color that indicates which chemicals are present. 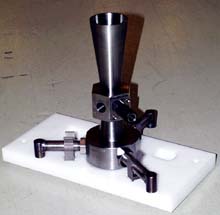 In addition, Medusa includes an instrument that measures how much carbon 12 and carbon 13 are in gases coming from undersea vents to find out if living things have used these gases. The presence of these gases provides scientists with clues that life might exist at a particular site.

A third major instrument aboard Medusa looks for the natural glow, or fluorescence, emitted by all living things when light strikes them. Each life form has a fluorescent 'fingerprint' that scientists can use to identify it as an organism.

In the near future, NASA is planning to use fully equipped Medusa systems to explore extreme undersea and other environments on Earth, seeking unknown life forms, according to Flynn.

Images related to Medusa are available on the Internet at: http://amesnews.arc.nasa.gov/releases/2004/medusa/medusa.html

E-mail: jbluck@mail.arc.nasa.gov
› Back To Top