Cool Fuel Cells
Fuel cells promise to be the environmentally-friendly power source of the future, but some types run too hot to be practical. NASA-funded research may have a solution.

Astronauts have been using them for power aboard spacecraft since the 1960s. Soon, perhaps, they'll be just as common on Earth -- powering cars, trucks, laptop computers and cell phones.

By combining hydrogen fuel with oxygen, fuel cells can produce plenty of electric power while emitting only pure water as exhaust. They're so clean that astronauts actually drink the water produced by fuel cells on the space shuttle.

In recent years the interest in bringing this environmentally friendly technology to market has become intense. But there are problems: You can't "fill 'er up" with hydrogen at most corner gas stations. And fuel cell-based cars and computers are still relatively expensive. These obstacles have relegated fuel cells to a small number of demo vehicles and some specialty uses, such as power aboard the space shuttle and back-up power for hospitals and airports.

Now NASA-sponsored research is helping to tackle some of these obstacles. By finding a way to build "solid oxide" fuel cells that operate at half the temperature of current designs--500°C instead of a blistering 1,000°C -- researchers at the Texas Center for Superconductivity and Advanced Materials (TcSAM) at the University of Houston hope to make this kind of fuel cell both cheaper to manufacture and easier to fuel.

"Our key advance was making the heart of the fuel cell -- the sheet of electrolyte that controls the flow of electrically charged ions -- out of a thin film only one micron thick," says Alex Ignatiev, the director of the NASA-funded TcSAM.

Above: A functioning cell in a Solid Oxide Fuel Cell (SOFC) stack. [more]

In contrast, today's off-the-shelf solid-oxide fuel cells have electrolyte layers 100 microns thick or more (a micron is one thousandth of a millimeter). Ignatiev explains: "The thinness cuts down internal resistance to electric current, so we can get comparable power output at much lower operating temperatures."

To make this ultra-thin layer, Ignatiev and his colleagues at TcSAM don't simply shave down a chunk of bulk material until it's thin enough. Instead, they grow the electrolyte atom by atom, depositing one layer of atoms at a time in a process called epitaxy. The thin films in TcSAM fuel cells are about 1000 atoms thick. 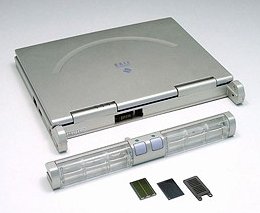 Left: This prototype Casio laptop can run for more than 20 hours on one refueling of its fuel cell power supply, shown here removed from the computer. Copyright 2002 Casio Inc.

Squeezing out the same power at half the temperature creates a domino effect of cost savings. For one, cheaper materials can be used to build them, rather than the expensive heat-tolerant ceramics and high-strength steels demanded by 1,000-degree fuel cells. And the automobiles and personal electronics that could use these fuel cells can also forgo exotic materials and elaborate heat-dissipation systems, lowering manufacturing costs. All of this tips the scales of economic feasibility in the right direction.

Support for fuel cells as the successor to the internal combustion engine is widespread. All of the major automobile manufacturers are busily developing fuel-cell vehicles, and President Bush recently proposed spending US$1.2 billion to help bring the technology to market.

The portable electronics industry is also exploring miniature fuel cells as a more powerful, longer lasting replacement for batteries. Intel, for example, has funded a start-up company called PolyFuel to develop such a fuel cell for laptops.

Solid-oxide fuel cells are one of six types being developed today. Each depends on a different chemical trick to combine the hydrogen fuel with oxygen to produce power. The automotive industry is looking primarily at proton exchange membrane (PEM) fuel cells to power tomorrow's cars and trucks, but some companies are also considering the advantages of the solid-oxide variety. 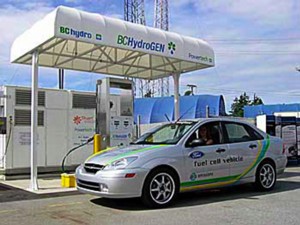 Right: Hydrogen fueling stations like this one in Vancouver, Canada, are still rare. The vehicle fueling up is a Ford FCV. Image copyright Powertech Labs. [more]

Key among these advantages is the ability to run on readily available fuels, such as methanol or even gasoline, which contain hydrogen bound to carbon and sometimes oxygen. The other five types of fuel cell can do this as well, but only with the help of additional hardware called a "reformer," which extracts pure hydrogen from these other fuels. These reformers cost extra money, add bulk to the engine, and sap power, cutting the engine's overall efficiency roughly in half.

Most of the environmental benefit of fuel cells is lost when hydrocarbon fuels are used, because extracting hydrogen from them leaves behind CO2 and pollutant gases that end up in the exhaust. But it helps solve the "chicken and egg" problem: Who's going to buy hydrogen-powered cars until most gas stations have hydrogen pumps? But what company is going to pay to install hydrogen pumps at hundreds of gas stations until there are plenty of fuel-cell cars on the road? Solid-oxide fuel cells can bridge the gap. They can run on methanol or gasoline now and then switch to pure hydrogen as it becomes available.

The thin-film variety being developed at TcSAM improves on this fueling flexibility. Ignatiev explains: "Normal solid-oxide fuel cells can use fuels like methanol, but they become impaired over time as carbon coats the fuel cell's nickel electrode," he says. "This happens partly because of the cell's 1,000-degree operating temperature. Research shows that this doesn't happen--at least not to an appreciable degree -- at the lower temperatures at which our cells operate."

Above: The layered heart of a solid-oxide fuel cell includes a nickel anode, which can become coated with carbon when operated at too-high temperatures. Cool-operating cells do not have that problem. [more]

TcSAM's fuel cells have not yet been tested with fuels other than pure hydrogen, Ignatiev says, but the scientists plan to perform tests with methanol-like fuels during the next stage of research.

There's still much work to be done. If all goes well, though, these thin films could pave the way to clean-running SUVs and other wonders of a hydrogen-based economy.