Resilient Rockets
Spacecraft and automobiles could benefit from a new NASA technology that protects the insides of scorching-hot engines.

Once humans return to the Moon and begin "living and working there for increasingly extended periods of time," as outlined in the new Vision for Space Exploration, increasingly frequent trips between the Earth and the Moon will be necessary to ferry people and supplies. 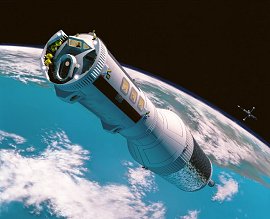 Keeping a "space ferry" parked in Earth orbit, instead of returning it to the ground and spending money and fuel to launch it off the planet's surface each time, is one scenario for making the commute to the Moon more economical. A smaller vehicle would then be used to move people between the ferry and the ground.

Right: An artist's concept of an Earth-to-Moon space ferry. [More]

This idea has some advantages, but it also suffers from an engineering obstacle--namely, maintenance. How do you maintain a vehicle that never returns to Earth?

The main engines of the Space Shuttle, the current creme de la creme of liquid rocket propulsion, must be returned to the ground between each mission for extensive maintenance. Severe conditions inside the engine combustion chamber--the reactive chemicals and the temperatures in excess of 2760oC (5,000oF)--cause a roughening of the material from which the combustion chamber liner is constructed (called "blanching"). The inner surface of the liner slowly becomes powdery and flaky, and this corrosion will worsen if the surface isn't polished between each mission.

Similar engines would eventually become a safety threat to a space ferry after several roundtrips to the Moon without making pit stops on Earth.

Special coatings can protect the engine combustion liners from damage, but these coatings too have their flaws. Because materials expand by varying amounts when heated, the coating will expand differently than the liner itself under the high temperatures of rocket firing. At the sharp boundary where the coating binds to the liner surface, this difference in expansion will shear the two apart, leading to separation and flaking. The coating solves one problem but creates another; regular maintenance is still mandatory. 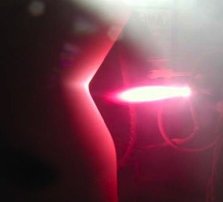 But now scientists at NASA's Marshall Space Flight Center (MSFC) have developed a solution to this conundrum. Using an advanced "vacuum plasma" technique to spray both the coating and the liner onto a mold, building them up slowly layer by layer, they have learned to build a rocket engine combustion chamber that can withstand more than a hundred firings in a row without the slightest sign of roughening or blistering.

Left: A rocket combustion liner (left) being made by spraying material onto a model with a hot plasma (right). [Larger image]

"It seems to be basically impervious to the wear-and-tear of repeated use, at least within the limits of our testing," says Richard Holmes, an engineer at MSFC. That trait makes a rocket built with this new technique an excellent candidate for an ultra-low maintenance space ferry or for a next-generation launch vehicle, Holmes says. The technique may also have use in improving race car engine performance and increasing the efficiency of normal automobile engines.

The advantage of this new technique is not found in something that it adds, but in something it takes away: the sharp boundary between the coating and the combustion liner. As the micron-thin layers of material are sprayed onto the mold, the ratio of coating to liner material is slowly varied from 100% coating to a 50-50 mix to 100% liner, creating a gradual transition between the two. This way, the stresses caused by heat-induced expansion get distributed over the whole transitional zone instead of focusing at the sharp boundary. The result: one awfully durable rocket liner. 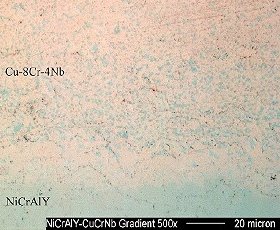 Right: This microscopic view of cross-section of the coating-liner boundary shows the gradual transition created by the vacuum plasma deposition technique. [Larger image]

The coating itself is a metallic alloy of nickel, chromium, aluminum, and yttrium, abbreviated as NiCrAlY (which Holmes pronounces "nick-RAL-ly"). In addition to the protection this mixture provides against weathering, it's also an excellent insulator against heat, reducing the temperature of the rocket combustion liner during firing by 200oF.

It's this combination of heat insulation and resistance to wear that holds promise for race car and automobile engines, Holmes says. Race car engines run at much higher RPMs than street cars -- over 12,000 RPM is not unusual, versus a 6,000 to 8,000 RPM redline in most cars. These high RPMs lead to greater wear-and-tear, and race car engines must be overhauled frequently. A NiCrAlY coating with zirconia (a ceramic thermal barrier coating) applied by the vacuum plasma technique could improve the life of the piston heads and block heads of these engines.

Street car engines don't endure the kind of extreme stresses that race car engines do, but they do waste a tremendous amount of energy as heat, which is, in part, why car engines are so inefficient. Coating the piston heads and engine block cylinder heads with NiCrAlY would allow hotter combustion for higher efficiency and longer life, Holmes speculates.

Below: The silver-colored lining inside this sample rocket thrust chamber is NiCrAlY. [Larger image]

Time will tell what uses engineers find for this new technique, called Functional Gradient Material (FGM), but the technology is already developed. Holmes and his colleagues (Sandy Elam at MSFC, and Tim McKechnie at Plasma Processes, Inc.) have performed more than 100 test firings using small thrust chamber liners made in this way, and they are in the process of scaling up to larger, spaceship-sized designs.

With the help of this technology, the next generation of vehicles for manned space exploration would be able to go many more miles between checkups.

Editor's note: The technology described in this story is a spin-off of basic materials science research. It began years ago with scientists who were melting alloys and semiconductors in space-furnances. Melting and cooling these substances in microgravity is a good way to learn their basic properties, and, perhaps, to create new materials never before seen on Earth. But there was a problem: Semiconductors such as gallium arsenide were eating through the refractory metal containers scientists used (like a cook uses oven pans) to hold materials inside the furnace. The vacuum plasma technique with the FGM process was developed, with support from NASA's Office of Biological and Physical Research, to coat and protect the insides of these containers. Better rocket engines were an unintended but welcome bonus. You never know where basic research will lead!