We learned it in grade school. There are three forms of matter: solids, liquids and gases.

But that's not even half right. There are at least six: solids, liquids, gases, plasmas, Bose-Einstein condensates, and a new form of matter called "fermionic condensates" just discovered by NASA-supported researchers.

"This is a very exciting time," says University of Colorado/NIST physicist Deborah Jin, lead scientist for the group who produced the first fermionic condensate in Dec. 2003. "My group works extremely hard these days. Both the excitement of a major advance and the competition to be first have been driving forces." 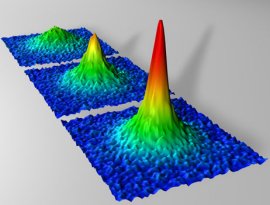 News of their landmark achievement appeared in the Jan. 24-30 online edition of Physical Review Letters.

Most second graders can recite the properties of ordinary solids, liquids, and gases. Solids resist deformation. They're stiff and they can crumble. Liquids flow, they're hard to compress, and they assume the shape of their container. Gases are less dense, they're easy to compress, and they not only assume the shape of their container ... they expand to completely fill it.

The fourth form of matter, the plasma, is gas-like, made of atoms that have been ripped apart into ions and electrons. The sun is made of plasma, as is most of the matter in the universe. Plasmas are usually very hot, and you can keep them in magnetic bottles.

The fifth form, the Bose-Einstein condensate (BEC), discovered in 1995, appears when scientists refrigerate particles called bosons to very low temperatures. Cold bosons merge to form a single super-particle that's more like a wave than an ordinary speck of matter. BECs are fragile, and light travels very slowly through them. (Read Science@NASA's A New Form of Matter: I to learn more about BECs.)

Now we have fermionic condensates--so new that most of their basic properties are unknown. Certainly they're cold. Jin created the substance by cooling a cloud of 500,000 potassium-40 atoms to less than a millionth of a degree above absolute zero. And they probably flow without viscosity. Beyond that...? Researchers are still learning.

"When you find a new form of matter," notes Jin, "it takes a while to understand it."

Bosons are sociable; they like to get together. As a rule of thumb, any atom with an even number of electrons + protons + neutrons is a boson. So, e.g., ordinary sodium atoms are bosons, and they can merge to become Bose-Einstein condensates.

Fermions, on the other hand, are antisocial. They are forbidden (by the "Pauli Exclusion Principle" of quantum mechanics) to gather together in the same quantum state. Any atom with an odd number of electrons + protons + neutrons, like potassium-40, is a fermion.

Jin's group found a way around the antisocial behavior of fermions. They used a carefully applied magnetic field to act like a fine-tunable "Cupid." The field causes loner atoms to pair up, and the strength of that pairing can be controlled by adjusting the magnetic field. Weakly paired potassium atoms retain some of their fermionic character, but they also behave a bit like bosons. A pair of fermions can merge with another pair--and another and another--eventually forming a fermionic condensate. 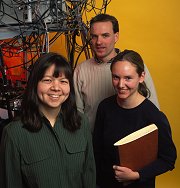 A closely related phenomenon is superconductivity. In a superconductor, paired electrons (electrons are fermions) can flow with zero resistance. There is intense commercial interest in superconductors because they could be used to produce cheaper, cleaner electricity, and to build high-tech marvels like levitating trains and ultra-fast computers. Unfortunately, superconductors are difficult to handle and study.

The biggest problem with today's superconductors is that -135 C is the warmest temperature at which any of them can operate. The liquid nitrogen or other cryogenics needed to cool the wires down make any apparatus using superconductors expensive and bulky. Engineers would rather work with superconductors at room temperatures.

Left: Pairs of fermions can get together and act like bosons. [Larger Image]

NASA has many uses for superconductors. For instance, gyros that keep satellites oriented could use frictionless bearings made from superconducting magnets, improving their precision. Also, because superconductors can carry the same amount of current as copper in a much smaller wire, the superconducting electric motors aboard spacecraft could be 4 to 6 times smaller than ordinary motors, saving precious volume and weight.

Others speculate that superconductors could play a role in a permanent Moon base, such as the one in President Bush's recently announced vision for future human exploration of space. Superconductors would be a natural choice for ultra-efficient power generation and transmission, because ambient temperatures plummet to -173 C during the long lunar night. And during the months-long journey to Mars, a "table top" MRI machine made possible by superconducting wire would be a powerful diagnosis tool to help ensure the health of the crew.

The Moon. Mars. There's no telling where fermionic condensates might take us. Definitely beyond grade school....

Editor's note: This story mentions six phases of matter: solids, liquids, gases, plasmas, BECs and fermionic condensates. Physicists debate the total. You could add to the list many other forms such as liquid crystals, glasses, ferromagnets, paramagnets and so on. Do fermionic condensates rightly belong among the major categories, like liquids and solids, or with less fundamental subdivisions such as liquid crystals? This question will be answered in the months and years ahead as researchers learn more about the properties of coalescing fermions.