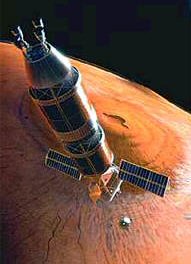 Well, OK, membranes can't do everything. Membranes won't boost us into space. And they won't carry us to Mars. But membranes could solve some of the problems of traveling there. And once we arrive, they could help us get back.

Right: Spacecraft traveling to and from Mars might one day rely on membranes for fuel and clean air. NASA artwork by Pat Rawlings, SAIC. [More]

Basically, membranes are a semi-permeable barrier. They're like a wall, except that gases, and even liquids, can seep through them. But--here's the key point--different molecules move through membranes at different rates. Membranes can therefore be used to sort things out, separating one type of molecule from another.

Doug Way of the Colorado School of Mines and Lockheed engineer Larry Mason are working on a NASA-funded project that uses membranes to help produce rocket fuel from the Martian atmosphere. The principle is simple: The Martian atmosphere is 95% carbon dioxide (CO2). Using membranes, explorers could extract some of that CO2, which when mixed with hydrogen and heated yields methane--a useful propellant for rockets or rovers.

Water is a byproduct of this type of methane production, called the Sabatier process (discovered by the French chemist Paul Sabatier in the nineteenth century). What's more, water can be electrolyzed into oxygen, for breathing, and hydrogen, which can be used to produce another round of methane.

Although the Martian atmosphere is almost pure CO2, it's not pure enough for the Sabatier process. Carbon dioxide must be separated from the other atmospheric gases before it's processed. Otherwise unused gases--mostly nitrogen and argon--build up, and will eventually keep the procedure from working. Way and Mason are developing a membrane that will separate out CO2. 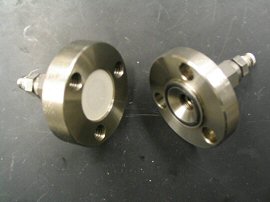 The specialized polymers that make up these membranes, some of which were developed at the Idaho National Environmental and Engineering Laboratory, are engineered to increase carbon dioxide solubility. "We add in groups of molecules that are polar--they carry an electric charge," says Way. Because carbon dioxide molecules are also polar, they're attracted to charged groups in the membrane.

The membranes are tested in a special chamber that simulates the Martian environment, explains Larry Mason. The device, which is about a meter high, is divided into two compartments. One contains a Mars-like atmosphere, and the other side contains a vacuum. They're separated by a membrane that's about one square inch in surface area. A mass spectrometer measures how easily each gas moves into the vacuum side.

"In the best [membrane] material we've found," says Way, "at Martian conditions, CO2 was transferred across the membrane about 50 times faster than nitrogen."

"Right now," adds Mason, "we're screening different candidate materials to find the ones that permeate CO2 the best. Once we find that, we can concentrate on getting enough through in an appropriate amount of time, by changing the amount of area, packaging it, and so on." 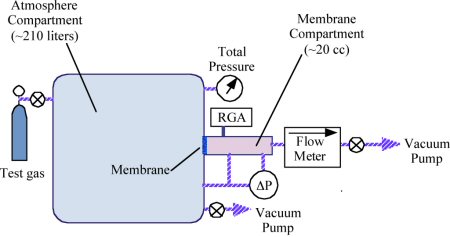 The researchers want to design a device that produces a gas that's 99.8 percent CO2 at a rate of 2.5 liters per minute. To do that, Way says, will require quite a bit of membrane. Although the membrane is very thin--about 25 microns, one-quarter of the diameter of a strand of hair--it will probably need to be about 300 square feet in area, the size of a small room. All that will have to fit into a package of about 1 square foot.

But a membrane that separates CO2 from other gases can do more than provide the raw material for rocket fuel. "This is fundamental technology," says Mason. "It's got all kinds of uses."

It could, for example, be used to filter air on the space station or on a spaceship bound for Mars. Carbon dioxide, which is a waste product of our metabolism, must continually be removed from the atmosphere of self-contained spacecraft. Membranes that are permeable only to carbon dioxide would be perfect, says Mason. "The CO2 would just passively go through the membrane into a holding chamber--or out into space. Oxygen and other gases would stay intact inside the habitat." 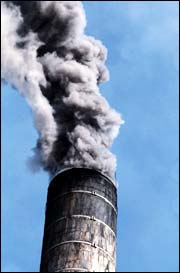 These membranes could potentially help slow global greenhouse warming, too. "There's some thought," says Mason, "that a membrane could be used in extracting CO2 from factory smoke stacks--reducing the amount of carbon dioxide that's dumped into atmosphere." Such an application still lies in the future, he says.

"The biggest potential application," adds Way, "is the removal of CO2 from natural gas. CO2 is the most common contaminant in natural gas besides water vapor. Membrane separations are one of the primary processes used to filter natural gas so that it meets pipeline specifications of less than 2 percent CO2." This is a big deal because "the natural gas industry is huge--more than 100 billion dollars per year in retail value," according to Way.

To Mason, "the most exciting part of this technology is the fact that it may leverage us to actually go to Mars and live and work there someday." And, in the meantime, there are plenty of uses for it right here on Earth.