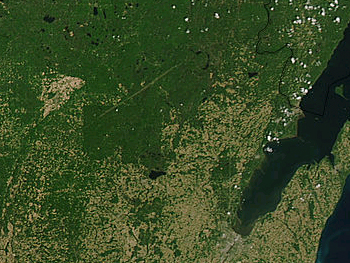 Image above: A tornado left this scar in a forested region of Wisconsin on June 7, 2007. Click image for higher resolution. Image Credit: NASA's MODIS Rapid Response.

A series of tornadoes ripped across central and northeast Wisconsin on the evening of June 7, 2007, leaving a path of destruction visible from space.

This image of the track of one of those tornadoes was captured on June 9, 2007, by the Moderate Resolution Imaging Spectroradiometer (MODIS) on NASA’s Terra satellite. The tornado track is the diagonal line running through the dark green, forested area, just left of the center of the image.

The path torn through this densely wooded area stands out quite clearly in the satellite image, as tens of thousands of trees were leveled by the devastating funnel cloud.

One of the tornadoes to strike the area was given an F-3 rating by the National Weather Service, classifying it as a “strong” tornado that causes severe damage and has wind speeds between 158 and 206 miles per hour.

For more information on the Wisconsin tornadoes: