Historic Volcanic Eruption Shrunk the Mighty Nile River
Volcanic eruptions in high-latitudes can greatly alter climate and distant river flows, including the Nile, according to a recent study funded in part by NASA. 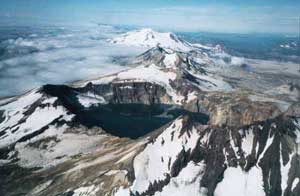 Image right: Aerial view along the main volcanic chain from the caldera lake of Mount Katmai, Alaska, across the peaks of Trident Volcano, to snow-clad Mount Mageik, a distance of about 20 kilometers (12.4 miles). Click image to enlarge. Credit: USGS

Researchers found that Iceland's Laki volcanic event, a series of about ten eruptions from June 1783 through February 1784, led to unusual temperature and precipitation patterns, including a significant reduction in the amount of rain that fell over much of the area surrounding the Nile River and led to record low river levels. The effect of the eruptions peaked in the summer of 1783.

The study provides new evidence that large volcanic eruptions north of the equator often have far different impacts on climate than those in the tropics. "While considerable research has shown that eruptions in the tropics influence climate in the Northern Hemisphere winter, this study indicates that eruptions in high-latitudes produce changes in atmospheric circulation in the Northern Hemisphere summer," said lead author Luke Oman, Rutgers University, New Brunswick, N.J. 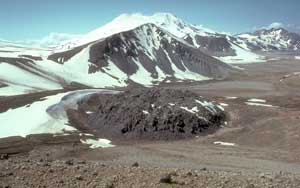 Image left: Volcanic dome atop the Novarupta vent, Valley of Ten Thousand Smokes, Katmai National Park and Preserve, Alaska. The dome was erupted from the same vent that expelled about 15 cubic kilometers (9.3 cubic miles) of magma in an enormous explosive eruption in 1912. Click image to enlarge. Credit: USGS

Using a computer model developed by NASA's Goddard Institute for Space Studies, New York, the researchers linked the Laki eruptions to several climate effects across much of the Northern Hemisphere that resulted in below normal rainfall over the northern part of Africa and record low water levels on the Nile River for up to a year.

"These findings may help us improve our predictions of climate response following the next strong high-latitude eruption, specifically concerning changes in temperature and precipitation," said Oman. "Many societies are very dependent on seasonal precipitation for their livelihood and these predictions may ultimately allow communities time to plan for consequences, including impacts on regional food and water supplies." 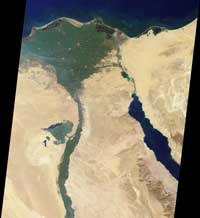 Image right: This image of the northern portion of the Nile River was captured by the Multi-angle Imaging Spectroradiometer (MISR) on January 30, 2001. The Nile is the longest river in the world, extending for about 6700 kilometers (4163 miles) from its headwaters in the highlands of eastern Africa. Click image to enlarge. Credit: NASA/GSFC/JPL

The Laki event had such a significant impact on the climate because it released large amounts of sulfur dioxide into the atmosphere. When combined with water vapor, the gas formed into tiny particles called aerosols that reduced incoming sunlight, cooling the average temperature over Northern Hemisphere land masses by as much as 5.4 degrees Fahrenheit in the summer of 1783, as simulated with the computer model. Tree ring data also showed significantly reduced tree growth in the summer of 1783, indicative of the coolest summer of the last 400 years in northwestern Alaska, while tree growth in parts of Siberia was the least in 500-600 years. 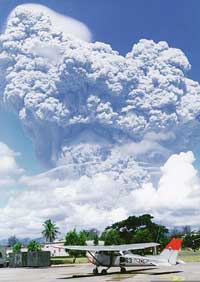 These unusually cool temperatures reduced the temperature difference between the land masses of Eurasia and Africa and the Indian and Atlantic oceans, weakening the African and Indian monsoon. A monsoon is a seasonal shift in wind direction and in this region marks the return of the rainy season. Without a significant temperature contrast between land and ocean, onshore winds weaken, reducing the inland transport of moisture and rainfall in the region.

In contrast to the cooling over Northern Hemisphere land masses, computer simulations showed the weakening monsoon led to an area of significant warming of 1.8 to 3.6 degrees Fahrenheit over the Sahel of Africa, southern Arabian Peninsula, and India in the summer of 1783. The researchers believe the weaker-than-normal monsoon reduced the cloud cover in the region, allowing more of the sun's energy to reach the surface, raising temperatures and further worsening drought conditions. 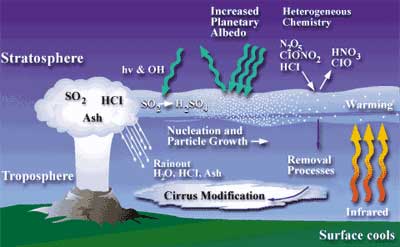 Image above: Following a volcanic eruption, large amounts of sulfur dioxide (SO2), hydrochloric acid (HCL) and ash are spewed into the Earth's stratosphere. In most cases, HCL condenses with water vapor and is rained out of the volcanic cloud. SO2 from the cloud is transformed into sulfuric acid. The sulfuric acid quickly condenses, producing aerosol particles which linger in the atmosphere for long periods of time. Click image to enlarge. Credit: NASA/LaRC

To see what effect major high-latitude volcanic eruptions have on rainfall and river levels, the researchers used records on the height of the Nile River that date back to 622 A.D. Record low Nile River water levels occurred in 1783-1784 following the Laki event. Similarly low levels were observed after the Mount Katmai, Alaska, eruption in 1912, when the Niger River was also at a record low. And in 939 A.D. there was also low Nile River flow following the Eldgjá eruption in Iceland. "Our analysis found there is less than a 3 percent chance that the Laki and Katmai low river flow events could be attributed to natural climate variability," said Oman.