'Twilight Zone' Detected Around Clouds
There seems to be something new under the sun -- in the sky, specifically -- that could complicate scientists' efforts to get a fix on how much the world will warm in the future. Greenhouse gases are not the only things in the air that influence the temperature of our atmosphere. Clouds and small airborne particles called aerosols also play an important and complicated role. And now a new ingredient has been discovered: a widespread and previously unseen “twilight zone” of particles that represents a gradual transition from cloud droplets to dry particles. 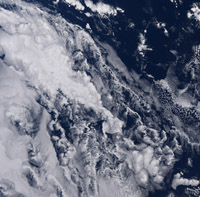 Image right: Because clouds change so quickly and come in so many types and sizes, they play a complicated role in Earth's climate. The influence of cloud fields is now even more complex due to the discovery of previously undetected particles in and around them. Credit: NASA GSFC, MODIS Atmosphere Science Team.

In a study published last month, scientists from the Weizmann Institute, Rehovot, Israel, and NASA's Goddard Space Flight Center, Greenbelt, Md., document for the first time that air around clouds that was previously considered clear is actually filled with particles that are neither cloud droplets nor typical dry aerosols such as dust and air pollution. Worldwide, up to 60 percent of the atmosphere labeled as cloud-free in satellite observations is actually filled with this twilight zone of in-between particles, according to the study.

“With the highly sensitive Earth-observing instruments NASA has used since 2000, we can distinguish aerosols and clouds in greater detail than ever before,” said Goddard's Lorraine Remer, a co-author on the study. “But the area around clouds has given us trouble. The instruments detected something there, but it didn’t match our understanding of what a cloud or an aerosol looked like. What we think we’re seeing is a transitional zone where clouds are beginning to form or are dying away, and where humidity causes dry particles to absorb water and get bigger.”

Image above: What appears as clear sky around a cloud as seen from the ground through a digital camera (left) actually has a twilight zone of light-reflecting particles around it (right). To see this, the blue light from the atmosphere in the original image is first subtracted (middle). The twilight zone is revealed after the darker parts of the image are enhanced (right). Credit: Koren et al., Geophysical Research Letters

Atmospheric scientists have been aware of an indistinct “halo” of particles immediately surrounding individual clouds, which are sometimes visible to the naked eye. These are thought to be aerosols accumulating moisture and growing in size, or a cloud droplet shrinking as it evaporates. But the newly detected twilight zone extends far beyond single clouds to fill an entire cloud field.

The research team first came across evidence for this transitional zone in satellite measurements of aerosols that looked “suspicious,” according to Remer. “After working with several years of data from the Moderate Resolution Imaging Spectroradiometer (MODIS) on NASA’s Terra and Aqua spacecraft, we consistently saw what appeared to be elevated levels of aerosols near clouds. But we couldn’t be sure that the instrument wasn’t actually detecting stray light bouncing off of the clouds.”

Image left: The "twilight zone" around clouds was confirmed by automated instruments in the worldwide, NASA-sponsored Aerosol Robotic Network that tracks the sun to gauge the amount of aerosol particles in the air. This installation is on Amsterdam Island in the Indian Ocean. Credit: AERONET

To find out whether the apparent aerosol detection around clouds in the satellite data was real, Koren and his colleagues, including the late Yoram Kaufman of NASA Goddard, turned to an independent observing system on the ground: the NASA-sponsored Aerosol Robotic Network. The automated instruments in this global network minimize scattered light effects as they track the sun and take readings of the amount and size of aerosols in a narrow column of atmosphere between the instrument and the sun.

Combining thousands of observations from 15 sites around the world, the researchers found that the amount of aerosol systematically increased as clouds got closer, as did the size of the particles. "We found that the region affected by this cloud field 'twilight zone' extends to tens of kilometers beyond the identified cloud edge," said Koren. "This suggests that 30 to 60 percent of the atmosphere previously labeled as 'cloud-free' is actually affected by cloud-aerosol processes that reflect solar energy back into space."

Introducing this new factor could lead climate scientists to recalculate their best estimates of how Earth's atmosphere holds and reflects solar energy -- the key to accurately predicting the future of global warming. "Current estimates of the effect of aerosols on global temperatures, which is primarily cooling, may be too small because the large contribution from this transition zone has been overlooked," Remer said. "If aerosols are offsetting warming more than we thought, it's possible that warming could increase more than expected in the future if aerosols continue to decline, as has been reported recently."

This summer the scientists hope to get a closer look at the "twilight zone" and the hard-to-detect particles inside it with new measurements by the Aerosol Robotic Network and NASA aircraft.