TRMM Spies Hurricane Rainfall Around the World
Few things in nature can compare to the destructive force of a hurricane. Called the greatest storm on Earth, a hurricane, with winds 74 mph or greater, is capable of annihilating coastal areas when it packs sustained winds of 155 mph or higher, intense rainfall and severe flooding. During its life cycle, a hurricane can expend as much energy as 10,000 nuclear bombs! 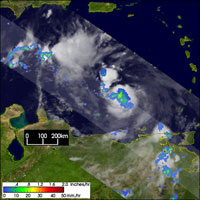 Image to right: TRMM observed Hurricane Charley as it crossed the Caribbean Sea and made landfall on the southwest coast of Florida on August 10, 2004. This image shows the horizontal distribution of rain intensity and combines data from TRMM's Precipitation Radar (PR), Microwave Imager (TMI) and Visible Infrared Scanner (VIRS). Click on image to enlarge. Click here for high resolution image (589 Kb). Credit: NASA/NASDA

For years, flooding has been the number one cause of death from hurricanes in the United States. As a hurricane approaches the coast, an 80-to-160- kilometer (50-to-100-mile) wide dome of ocean water -- called storm surge -- sweeps over the coastline. The resultant flooding can be worsened by a storm's often sudden and dramatic rainfall.

New research conducted by the University of Miami and the National Oceanic and Atmospheric Administration Atlantic Oceanographic and Meteorological Laboratory Hurricane Research Division shows that data from NASA's Tropical Rainfall Measuring Mission (TRMM) can indicate how rain falls at different rates in varying areas of a storm.

In this study, the researchers analyzed TRMM data on 260 tropical cyclones -- from weak tropical storms to major hurricanes -- in six major ocean basins. Researchers found that rainfall intensity and the region of heaviest rains was dependent on a storm's wind speeds, its location, and the environment of each basin. 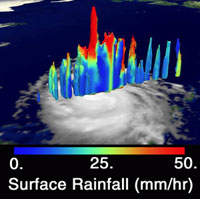 Image to left: In 1998, TRMM observed some of the largest chimney clouds seen from above inside Hurricane Bonnie, showing a (cumulonimbus) storm cloud, towering like a skyscraper, 59,000 feet (18 kilometers) into the sky from the eyewall. Click on image to enlarge.
Click here for high resolution image (3.4 MB).
Click here to view animation (6.9 MB). Credit: NASA/NASDA

When all storms were averaged together the most intense rainfall occurred within 50 kilometers (about 31 miles) of a storm's center, with evidence of very large rain rates as far as 300 to 400 kilometers (about 186 to 250 miles) from the center.

When all storms were averaged and analyzed basin by basin, storms in the North Indian basin were the wettest, and East-central Pacific storms were the driest. The research also found no direct link between the size of a storm and rainfall intensity.

It is also important to recognize that destructive flooding can occur with even relatively weak storms. A storm that looks "ragged" and asymmetric on your television screen is still capable of producing destructive rainfall. The researchers found that rainfall rates can vary widely within each section, or quadrant of the storm, with the heaviest rainfall often occurring in one of the four quadrants. The region of greatest rainfall usually shifts from the front-left to the front-right quadrant as a tropical cyclone's intensity increases.

Image to right: The map shows the surface rainfall for Hurricane Floyd on September 13, 1999. The rainfall was measured by TRMM's Microwave Imager instrument. The color coded rain rate is in inches per hour, with blues showing lighter rain and reds indicating higher rainfall. The distance between each circular line growing from the storm's center represents 10 kms. Click on image to enlarge. Click here for high resolution image (9.8 MB). Credit: Naval Research Laboratory, reproduced in Lonfat et al., University of Miami

Hurricane Agnes, in 1972, serves as a long-standing example of the need to take all tropical cyclones seriously. Just barely a hurricane when it struck Florida and a tropical depression when it moved into the Northeast and combined with a low pressure system, the unprecedented rainfall produced by Agnes ravaged the Mid-Atlantic States.

Agnes' total rainfall measured anywhere between 6 to 19 inches from Virginia to New York, with additional flooding in the western Carolinas. 117 deaths were reported and the storm's rainfall made it the costliest natural disaster in the United States at that time. Today, Agnes remains the worst natural disaster ever to affect Pennsylvania. In total, the storm was responsible for $2.1 billion in damage in the United States, the vast majority of which came from the flooding.