Seeing how rain falls from top to bottom and how heavy the rain falls throughout parts of a tropical cyclone is very important to hurricane forecasters. NASA has sped up the process of getting this data within three hours, and making it appear in 3-D. The new process now gives information quickly enough for forecasters to use.

Image left: The image on the left shows the intensity of rainfall in a tropical cyclone. The colorbar above the image shows millimeters of rainfall per hour, with reds being the heaviest rainfall. The image on the right shows a 3-D structure of rain in tropical cyclones. The highest cloud tower on the image reaches 10 kilometers (6.2 miles) high. Click here to view a higher resolution copy of this image. Credit: NASA

Scientists at NASA have developed a way to process radar data from NASA and the Japan Aerospace Exploration Agency's (JAXA) Tropical Rainfall Measuring Mission (TRMM) satellite that can help with forecasting changes in a hurricane's intensity.

"What's important is that the vertical rain structure data used to take a longer time to process," said Jeffrey Halverson, Meteorologist and TRMM Education and Outreach Scientist. With hurricane forecasts, events change quickly, and meteorologists need data as fast as possible. This new process gives them data within three hours from the time the satellite has flown over a tropical cyclone." 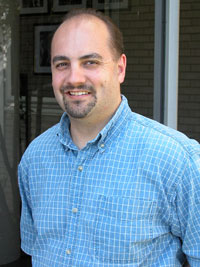 TRMM is a unique satellite that is able to estimate rainfall measurements from space, and rainfall is a key ingredient in hurricanes. For example, heaviest concentrations of rainfall for example are found around the eye or center of the hurricane. Scientists can tell, based on if the rain is getting stronger or weaker, whether or not the hurricane is strengthening or weakening.

In 2004, research confirmed that when larger towering clouds reach a certain height surrounding the hurricane's open eye, in what is called the "eye-wall," they can be associated with a strengthening storm. TRMM can identify these "hot towers" of piled up clouds and cam help make forecasts more accurate. 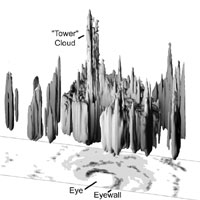 Image Left: This TRMM Precipitation Radar overflight of Hurricane Bonnie shows an 11 mile high "tower" cloud perched on the eyewall of the storm. Click here to learn more about this image.

Because the TRMM satellite covers the tropical areas of the entire globe, the Precipitation Radar (PR) instrument takes snapshots of storms as it passes by. Every time it passes over a named tropical cyclone anywhere in the world, the PR will send data to create these 3-D "snapshots" of the storms.

The hurricane snapshot will show forecasters information on how heavy the rain is falling from different parts of the storm, such as the in eye-wall versus the outer rainbands, for example. It also gives a 3-D look at the cloud heights and "hot towers" inside the storm. Higher hot towers around the eye usually indicate a strengthening storm. 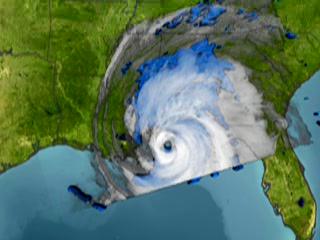 Image right: TRMM captured Hurricane Ivan as it made landfall on September 16, 2004. Ivan affected Alabama, Florida, Lousianna, and Georgia. TRMM sees the rain (through the clouds). Blue areas have at least 0.25 inches of rain per hour(hr). Green shows 0.5 inches; yellow, at least 1.0 inch, and Red shows the most intense rains where over 2.0 inches/hr. were recorded. Click here to view the animation.Credit: NASA

The snapshot also gives valuable information about how the storm is put together. For example, when scientists studying a snapshot see that the body of the hurricane may be tilted inward to the hot towers, it could give clues as to whether a wind shear, or a sudden change in direction of winds near the top of the storm, may impact the storm's strength. Normally, when a hurricane runs into a strong wind shear, it weakens.

Forecasters and the general public can access the data and look into the eye of a storm by going to the TRMM website. The website can be found at: http://trmm.gfsc.nasa.gov.

"We hope this new data product will help the community to better assess the structure and intensity of tropical cyclones," Halverson said.